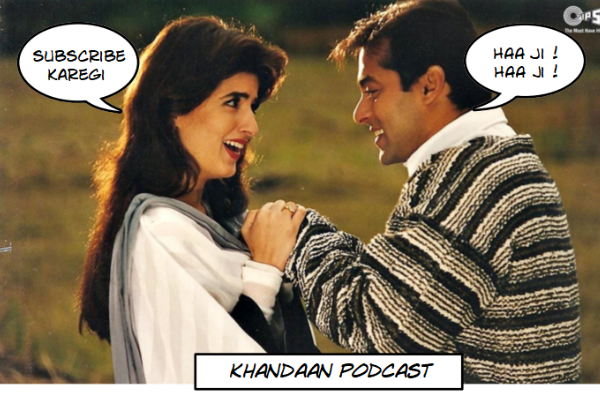 Welcome to Episode 17 of the Khandaan Podcast in which our audience thinks it’s doing us a favor and makes us watch Jab Pyaar Kisise Hota Hai (1998).

Starring Salman Khan in one of his last candyfloss (?) romance roles, this film evokes strong childhood memories of going to the cinema for two of our hosts. Co-starring Twinkle Khanna in one more role she couldn’t play, JPKHH makes a number of strange choices – there’s Anupam Kher is a role tailor made for Amrish Puri, Johnny Lever in a role meant for Laxmikant Berde, Namrata Shirodkar with enough charisma for a female lead, and young master Aditya Narayan who gets on everybody’s nerves.

Asim and Amrita were Not Fans of this movie but Sujoy outed himself as a sleeper Salman fan when he refused to let his co-hosts ruin his fond memories of this film. But before we get to the good stuff, we make our way through all the new trailers that came out this past week – the execrable Batti Gul Meter Chalu (rechristened by Sujoy in a way that will get us banned), the surprising Manmarziyan, the puzzling Laila Majnu, and a whole host of other Bolly things you’ll want to hear about.

Subscribers are reminded that Khandaan is currently accepting nominations for our special run. Please send your suggestions for movies of the Khans that you feel we must watch to upodcasting@gmail.com. But first, coming up are a few episodes with guests who wish to discuss their favorite Khan movie.