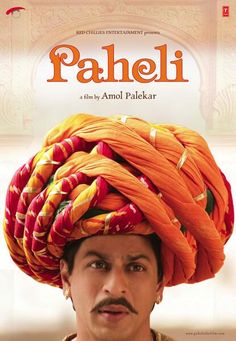 Episode 7 of the Khandaan Podcast finds co-hosts Asim, Sujoy and Amrita reunited to discuss Paheli (2005), starring Shahrukh Khan in a double role, Rani Mukherjee and a whole host of cameos from Juhi Chawla to Amitabh Bachchan.

This Red Chillies Entertainment film was directed by Amol Palekar, the everyman of yesteryears’ parallel Hindi cinema, and was even India’s official entry to the Oscars for its year. Based on a short story about a bride and the ghost who loves her, Paheli made a lot of right noises about women’s empowerment and the right to choose. More than a decade on, we examine how those messages hold up.

Sujoy declares Paheli the best film we have watched on this podcast thus far, while many of our listeners call it their favorite film, but Asim and Amrita play spoilsport.

We also take a moment to discuss the passing of cinema legend Sridevi and the recent Bollywood release, the rather controversial hit Sonu ke Titu ki Sweety.

We would love it if you can rate or write us a small review on iTunes!