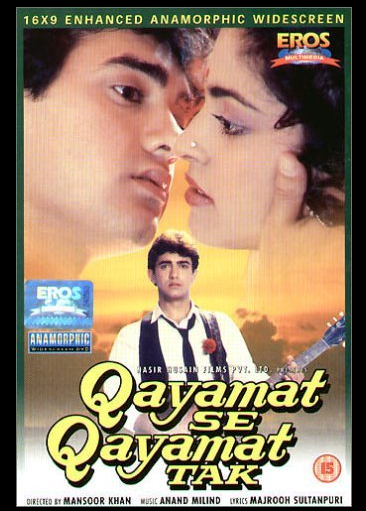 Asim, Sujoy, and Amrita, co-hosts of the Khandaan podcast, begin their foray into all things Khan-related with Qayamat se Qayamat Tak (QSQT). Almost a relic of another era, this 1988 romance is the movie we chose as Aamir Khan’s debut feature despite his earlier appearances as a child star as well as his lead performance in the faux-art film Holi (1984).

Very little of Aamir as we know him today is seen in the fresh-faced hero of QSQT with his impish grin and shy glances at a delightfully effervescent Juhi Chawla (also making her debut). Directed by his cousin, Mansoor Khan, QSQT shows the youth of all those involved in the making of this film – in its tenderness, earnestness, conviction, and behind-the-scenes effort they put into crafting this the biggest success they could possibly imagine.

While neither Asim, Sujoy nor Amrita were old enough to be the target audience of this film (ahem! We are mere babies), we do have some memories of what a cultural phenomenon this movie became. It’s Romeo and Juliet undertones, the weird emphasis on caste, and the fact that the adults in this movie appear to be acting in a world far removed from the one inhabited by the sweet young love of its leads should make it a difficult watch but good filmmaking survives the years even when the material appears dated. QSQT remains a testament to Mansoor Khan’s talent.

It is also buoyed by one of the best soundtracks in Hindi cinema history, with beautiful hummable tunes by ace duo Anand Milind, one of the last of its kind. Maine Pyaar Kiya would soon replace it and surpass it in audience affection, but of all three debuts, QSQT’s is the soundtrack that has survived the test of time.

Note: The Khandaan podcast is an interactive experience! Please click here to vote for our first official episode.