The debut feature from Amit Ranjan Biswas, Bridge, draws together a lot of big questions, into a relatively small setting. 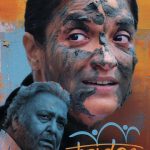 In summary, a simple story; two strangers, both at the end of their tether, encounter each other on a bridge while attempting to commit suicide.  We have no idea why and this is slowly revealed as the film unfolds.  Little by little, like layers of an onion being peeled back, we understand more about the two main characters, played by Soumitra Chatterjee and Sandhya Mridul.  Bridge is a very still film, shot in a very patient and tranquil way, with a lovely eye to photography.  And this establishes the platform for things such as: love, loss, mental illness, and more importantly, hope, love, happiness.  Forgetting his own suicide attempt, Soumitra’s widower, prevents a young woman from taking her own life and, upon taking her home with him, discovers there is far more to her story than simply wanting to kill herself.  Clearly traumatised, to the point she cannot walk properly, communicate or even eat, Soumitra repots the incident at the bridge to authorities, who show a very establishment reaction – log the incident, take names, locations, add it to the catalogue they’re already investigating and then send the woman to a hostel.

The reality of mental illness is such that there is no procedure that will magically make the problem go away – and this is reflected in Soumitra’s character, who it transpires is battling his own demons and depression, following the death of his wife and the loss of his daughter.  As we discover more about both of the stories, it’s the little things that make the big impacts – be that the starting to eat again, going to have a shave and a haircut, or simply changing the clothes worn.  Whilst not at all a difficult or depressing film to watch, I did fear for Mridul’s character when the clumsy attempts by the authorities nearly send her back over the edge again, undoing all of the hard work and perseverance of Soumitra and his staff.  I am sure this is all too common in cases of mental illness but thankfully in his instance we see common sense, love and patience rule the day.  However at this point we finally understand the true horror of her past and it is quite sobering indeed.

A lovely sense of serenity came over me at the end of Bridge and it was not at all saccharine, fitting in perfectly with the tone the film had already established.  There are a few minor things i had an issue with – the story of his daughter I never quite understood, for example – but throughout there are lovely touches such as the flute player, or the shots of birds in the city.  I think a western production would have zeroed in one one or two of the biggest themes and tried to explain them somehow, with a conclusion of sorts, but this is the joy of watching foreign films and seeing a different take on a universal theme.  Quite possibly not the film you think it is or could be, I recommend this for anyone looking to Asian cinema and wanting something outside the traditional Bollywood offering.