SHEKHAR KAPUR: A LIFE WITH ELIZABETH LIFF 2016 at the BFI

Although Shekhar Kapur was at the BFI Southbank to talk about making Elizabeth (surely this would have sat better at the London Film Festival than the London Indian Film Festival? #justsaying), I was not so secretly hoping that he would talk about Mr India, one of my all-time favourite films; pleasingly, he did. In fact, I could have listened to a whole talk on the film, such is my devotion to it and the gems he gave did not disappoint – that there was no bound script for the film, many insiders tried to dissuade him from making the film and explained to presenter Nick James (editor of Sight + Sound) how Sridevi’s Seema was based upon Lois Lane from Superman.

He also spoke of how producers felt Sridevi could not be presented as “sexy” (which was immediately disproved by a 10 second clip of that iconic song) or how Amrish Puri stated that he would never escape the shadow of being Mogambo. The most interesting insight was Shekhar talking about metaphorically narrating the film to his 14 year old self and basing his narrative on those reactions – which perhaps explains why it resonated with so many young children (including myself) at the time of release. 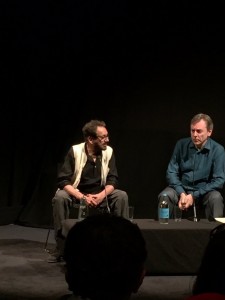 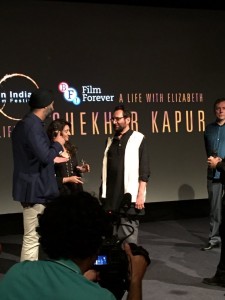 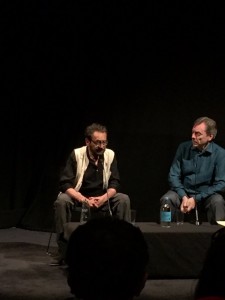 The other film that was discussed at length was Bandit Queen which Shekhar called his most instinctive film to date. With no commercial pressure or investors to satisfy, he was able to make his interpretation of the events that led to Phoolan Devi’s incarceration. Surmising the essence as the film of being about gender inequality, he also spoke how he wanted to show “the difference between nakedness and nudity” when filming the graphic sexual violence depicted on screen that survived being cut by the ever snip happy censor board of India.

Then it was time to talk all things Elizabeth. After Bandit Queen brought Shekhar to Cannes, the initial offer of a “frock film” did not appeal. Confessing to Working Title producer Tim Bevan that he was bored of British period dramas, he stipulated he wanted to make the Trainspotting equivalent of a period piece – and to his surprise, Tim agreed. Interestingly, Shekhar also insisted on casting the then relatively unknown Australia actress Cate Blanchett despite every top British actress vying for the role and after threatening to leave the project, he was able to get his way. Drawing parallels between Elizabeth I and Indira Gandhi, he also revealed that Elizabeth was actually a trilogy and was waiting for Cate to age before making the third and final instalment, teasing the theme: “if you think you are divine, how do you face your own mortality?”

Finally, the floor was opened for questions which ranged from what it was like to work with Amrish Puri (a great deal of fun -Mogambo was based on a Shakespearian villain and Amrish was directed to perform as if he were scaring 12 year old children from a rural village) to whether Paani (Water) was still going to be made (it is – has not been shelved but Yashraj Films are no longer producing due to creative differences) to using women editors so that he can redress the gender balance in his cinema and ensure a male viewpoint does not dominate.

Wrapping up the talk, Shekhar elaborated on how films allow one to discover oneself in ways an individual is previously unaware of and the struggle of how to make something relevant to the self is where his source of creativity and inspiration lies. With a candid demeanour and lots of wisdom, Shekhar Kapur not only made for a fascinating speaker but also one of the highlights of LIFF 2016.

Bhushan Kumar is a film obsessed amateur fashionista who lives in London.You can read more from him at www.bogeyno2.wordpress.com or follow him on Twitter: @bogeyno2