In the heart of the sea: review 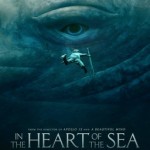 Coming to get you

Revealing the true story and inspiration behind Herman Melville’s Moby Dick, the new film from Ron Howard recounts the tale of the Essex, a whaling ship from New England. Based on a book by Nathaniel Philbrick, (in the heart of the sea: the tragedy of the whaleship Essex) the real-life maritime disaster is brought to life with a brilliant cast and a genuine attention to historical detail about life at sea on a whaler. I think it’s fair to say that there’s a cinematic elephant in the December room and that most other films will be in its shade. So what are you going to get from In The heart of the sea?

This is or ought to be, primarily about the dynamic between experienced first mate, Owen Chase (Chris Hemsworth) and the privileged but ingenue captain George Pollard (Benjamin Walker). Not much time is devoted to this which is a shame, however the depiction of life and conditions on board ship and the action shots – as much as can be deceived that way – more than compensate for this.

Once the tragedy to come becomes apparent, our attention is shifted towards the horrors of being lost at sea and tremendous physical, emotional and spiritual stresses the remaining crew are subjected to. Linking the pieces at sea, are scenes between Herman Melville (Ben Whishaw) and Tom Nickserson (Brendan Gleeson). This provides the link between the book Moby Dick and the actual gruesome events: Nickerson is 30 years older, having survived the ordeal at sea, but has become an alcoholic in his efforts to cope with the utter trauma he has been put through: recounting (reluctantly) the events to Melville, is a catharsis and long overdue.

Ultimately strongest when the camera captures the bursts of action and when close to the sea, In the heart of the sea provides a great antidote to the previously mentioned sci-fi elephant in the room and although not Ron Howard’s best movie, has more than enough to keep viewers’ interest and moves forward with sufficient pace that I was never bored.