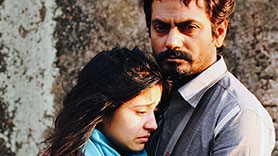 Haraamkhor is exactly the kind of film one hopes to see at a film festival – a film that pushes the envelope, has been made with care and attention and has lots of soul. Keeping a packed audience engaged throughout, the cosmos built by Haraamkhor instantly felt very real and three dimensional.

The story focuses on a love affair between a married teacher Shyam (Siddiqui) and his student Sandhya (Tripathi) as viewed by two of her mischevious male classmates Mintu and Kamal. Kamal is also madly in love with Sandhya and seeks Mintu’s advice on how to woo her. As the story takes an inevitable turn, the fall-out from it has varying consequences for all the characters.

Sharma guides the story with a steady hand so that the focus of the story remains on the relationship between the teacher and the student. What makes this seemingly familiar story so unique is the absence of any judgement so that the audience can make their own minds up – we see for ourselves how Shyam manipulates Sandhya as well as his wife and how his world falls apart when those around him don’t subscribe to his patriarchal thinking. I also loved the way in which the script manages to empathise with the anatagonists as well as the protagonist – we feel for Sandhya who is abandoned by her mother and is clearly in need of companionship but then we also find we cannot entirely hate Shyam (who on paper is incredibly unlikeable) and I also liked how the viewer mirrors Sandhya’s journey and learn to trust Sandhya’s future step mother (who turns out to be her saviour and friend she has needed all along).

It should be no surprise that Siddiqui turns in a stellar performance as Shyam – to play a paedophile sympathetically really demonstrates his strength as an actor and the way he can summon emotions almost at will and heighten or downplay any scene is simply amazing. Shweta Tripathi is excellent as Sandhya, giving her a vulnerability and innocence that immediately endears the viewer and makes one root for her throughout. The chemistry between Siddiqui and Tripathi is electric and really does elevate the script further. I absolutely loved Mohd Samad and Irfan Khan (not that one!) as Mintu and Kamal – both are refreshingly natural and play their roles with panache and gumption that entertains the audience but also gives the film some much needed balance from the darker moments of Haraamkhor (of which there are many). I also loved Shyam’s wife and Sandhya’s step mother who underplay their roles with skill and compassion.

Haraamkhor was without doubt my favourite film at the London Indian Film Festival 2015 – it is a film that manages to encapsulate a vast canvas without losing any of its quality or vision. I loved how it kept my attention throughout and I also have to praise the cinematography which really comes into its own in key scenes. Like all good independent Indian cinema, Haraam Khor has a universality to it so that it can be watched the world over and resonate across the board but also have local meaning too. I really hope this film gets a worldwide release as it will be loved not only by lovers of World Cinema but fans of great cinema too. Recommended.