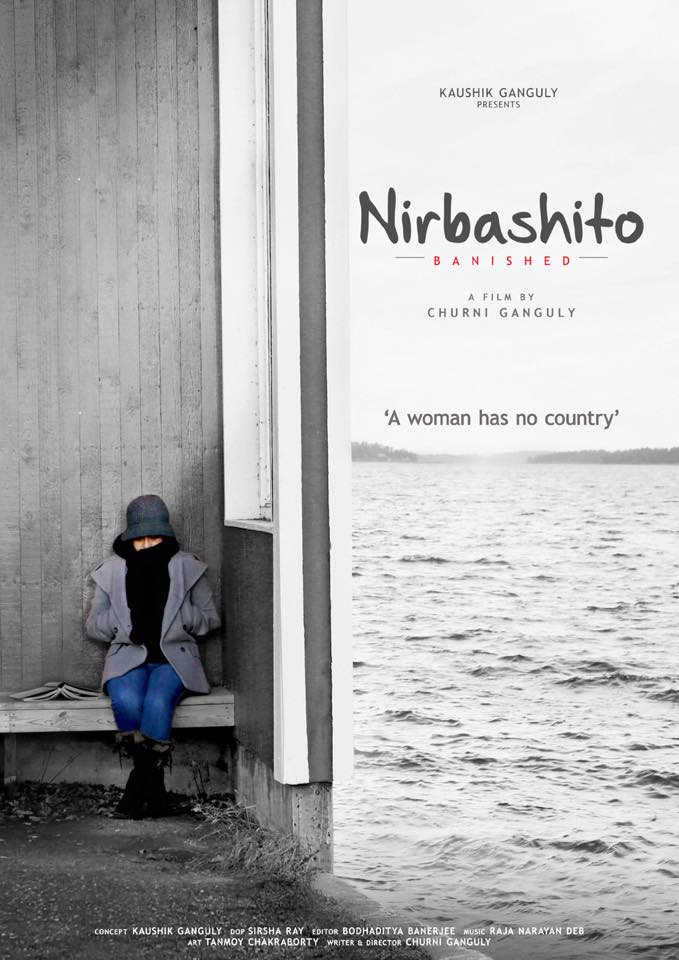 Debutante director and lead actress Churni Ganguly’s semi-biographical take on controversial writer Taslima Nasrin is absolutely soul stirring. In Nirbashito (Banished), even though the protagonist has no name, and is always referred to as Lady, or Madam, the resemblance to Nasrin is unmistakable. The story circles around this controversial figure – a female writer who has caused a stir amongst the powers to be with her literary works that question the patriarchal society that is deeply rooted in religion. As a result, she has been deported from her residence in Kolkata, to the cold and dreary interiors of Sweden. Her exile away from home, and her struggle against the loneliness that comes to haunt her is what Nirbashito is all about.

On paper, that does sound like a very uncomfortable and miserable watch. But Churni Ganguly’s portrayal of “the Lady” turns it into an unforgettable and personal journey that makes for compelling drama. She conveys the complex layers of this real person effortlessly. The dark circles under her smokey eyes show the lethargy in her – the sort that you perhaps get after a strenuous long flight. In this case, she is tired of being dragged from port to port, of having no home to call her own, and with no clear sign of where it all ends. And the constant irritation of not being able to speak with someone in one’s own language or eat the food that one likes in a foreign land – her banishment punishes her every day in a new way. And yet, against all odds, she continues to channel her struggle and turn it into the most lyrical prose. Ganguly’s portrayal is absolutely note perfect.

And on the other side of the spectrum, are the ones who are handling “The Lady”s cat – Baaghini. Saswata Chatterjee (Kahaani, Bhooter Bhabishyat) plays the compassionate friend who is looking after the cat, and is also juggling his own daily drama – a pregnant wife who feels deprived, and the circus of bureaucracy. This parallel story line provides the much needed comedic relief in this otherwise bleak tale. Supported excellently by the ensemble cast that includes Kaushik Ganguly (Churni Ganguly’s husband in real life), Raima Sen, and Martin Wallstorm (Mr. Robot), Nirbashito received the National Award for the Best Bengali Film, and much deservingly so.

Nirbashito’s empty wide shots of nothingness conveys the deafening silence of loneliness, and leaves you feeling the pain that one goes through when freedom of choice, and speech are snatched away from you. Amongst all the human drama, it highlights one of the most burning topics of today. The Lady says to her friend, “It is a fight between the pen and the sword. And the sword always wins”. Truer words were never spoken.

Nirbashito still has a screening on the 22nd of July at the London Indian Film Festival.

Head over to http://londonindianfilmfestival.co.uk/programme.htm for more info and tickets.