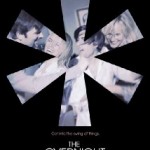 This is the latest film by director Patrick Brice and executive produced by Jay and Mark Duplass and Adam Scott.  Alex (Adam Scott) and Emily (Taylor Schilling) have recently moved to LA with their son RJ.  Looking to make new friends, they bump into Kurt (Jason Schwartzman) at the local playground, who invites them over for dinner with his wife Charlotte (Judith Godreche).  The overnight of the film’s title is then what ensues.

There is a lot of comedy in this film!  Kicking-off with an early morning bedroom scene the laughs keep coming consistently, only slowing down near the middle when things get a bit more serious and dark for a short while.  The jokes and humour in The Overnight help join up some adult themes and in a good way.  Making light of marital crises that can befall couples and what they will do to try and find a way out, the L.A. / California lifestyle and Europeans with relaxed liberal values are all targets for fun among many others.

Aside from the out and out humour in the film, what else is there on offer?  Well, both male and female insecurities are addressed – boobs, penises, pride and envy – and this, after a bit of round the houses (almost literally) culminates in quite possibly one of the most awkward 4-somes / more-somes you’re likely to see.  It is always good to see Jason Schwartzman in anything and I think he steals the show here, in addition to Taylor Schilling who is perfect as the slightly reserved / prudish wife not knowing what to do when things get a bit steamy.

The Overnight is really lead by Kurt and Alex with both Emily and Charlotte as willing and unwilling accomplices.  Certainly the men’s problems are most prominent, although this is not to say that the women don’t make any contributions as they most certainly do, especially Charlotte and her boobs.  There were times during the film I thought it would fall into the obvious, but I’m happy to report my attempts to second-guess things failed.  It is also a very short film by contemporary norms, hitting a very trim 79 minutes, something I think really works to its advantage.  Given the story takes place over around 8 hours or so in real life, the story is moved along at a great pace and this keeps things tight.

Genuinely one of the funniest films I’ve seen in a long long time, The Overnight is in cinemas this Friday, June 26th.   Check out the trailer below!