Sometimes a man can be so talented that facing him for a short chat can be intimidating. Writer- Producer- Director Vidhu Vinod Chopra is one of those men. He’s been involved with ground breaking cinema for a few decades and today he sat down with us to talk about his English venture Broken Horses.

Our Review of Broken Horses can be found here. 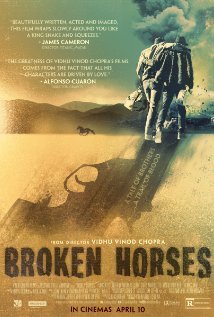 The legendary film-maker, who has always set a new benchmark for the Indian film fraternity and has made some of the most memorable movies that India has cherished like the Munnabhai series, 3 Idiots, Mission Kashmir, Parinda, among several others, has once again decided to reinvent the wheel. He has stepped out of his comfort zone and with Broken Horses he becomes the first Indian filmmaker to make a Hollywood Production – it is the first Hollywood film produced, directed and written by an Indian!

Set in the shadows of the US-Mexico border gang wars, Broken Horses is an epic thriller about the bonds of brotherhood, the laws of loyalty, and the futility of violence. The film has been co-written by Vidhu Vinod Chopra and Abhijat Joshi (PK, 3 Idiots, Lage Raho Munnabhai, Mission Kashmir) and it based on an original story by Vidhu Vinod Chopra.

Broken Horses is in currently playing in selected theaters.