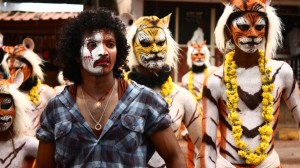 [Disclaimer: Due to messed up scheduling at the screening venue (for London Indian Film Festival), I missed the first 30 minutes of Ulidavaru Kandante, as I was still watching Goopi Gawaiya Bagha Bajaiya (review link here). This post is hence, more of a rant on the remaining 4/5th of the Ulidavaru Kandante experience.]

So, as I walked in straight into the world of Ulidavaru Kandante (UK, As Seen By The Rest) at 00:30:00, I was met with the end of Chapter 1, and a journalist called Regina (Sheetal Shetty) talking about something that went wrong, referred to as “the Incident”. I was left confused, and yet curious about what this incident was, and if I had missed it in the first 30 minutes. But at the same time, I was glad I that I came in just in time for the beginning of Chapter 2 – the story of Richi. Cue smoke machines, theatrical spotlights on, and through the smoky mist, enters our hero – director Rakshit Shetty as Richi, the cocky cop who oozes testosterone in every frame. This is one of those alpha male leads that’s part Tony Montana, part Vijay Dinanath Chauhan, and part Chulbul Pandey, sans the Sonakshi pyar-thappar angle, or the drunk sillyness. At first glance, Shetty looks like a long lost brother of Mahakshay ‘Mimoh’ Chakraborty, but one who can actually act, and commands attention, and minus 20-30 kilos (to be confirmed). Richi is not a do-gooder or a Robin Hood. He has a reputation to take care of, and even in a lungi, gulping down on local desi-daaru, with an unkempt moustache, that reputation brings broken noses for the unlucky ones. And that tiger dance, oh yes, I get that Singham metaphor. Richi does not walk, he has the gait of a lion, make up or not.

Coming back to the story, or stories rather, the trailer is quite spoilerific in my opinion. There is an incident, which we don’t know of, until the climax i.e. There are multiple witnesses, and their multiple/conflicting point-of-views, a Pulp-Fiction-esque MacGuffin red bag with shiny contents, and many bullet shots. There’s tiger-painted people dancing(I like tigers). If that sounds like UK borrows a lot from cinema pop-culture, yes it does. Does it look like a copy? No, it does not. Shetty’s influence is visible, but UK is a beast of its own. You can smell the authenticity in the environment, and it is quite obvious how comfortable it is in its own skin, and yet does not shy away to flash its influences – from Kurosawa’s Rashomon, to Scarface, to even Frank Miller’s Sin City. The director expertly hides the details, and patiently peels off each layer. With cliffhangers at the end of each chapter, and each chapter serving as a teaser for the final reveal, UK works because of its sharp editing, its crisp script, and the believability of the world that surrounds these characters.

Kudos to the DOP Karm Chawla to have presented Malpe in its most stunning onscreen version – from the warm views of the washed clean sea and sandy beaches, to the amber nights lit with fire. Painted tiger faces never looked this great. The hustle and bustle of Janmashtami festival in temple city Udupi errupts with its vibrance and is a colour overload of sorts. And that entry scene of Richi through the smoke (mentioned above), as he says “Phata Poster Nikla Hero” is a wolf-whistle worthy one. Coupled with a loud drum-heavy background score, UK does not go easy on your senses.

Donning the acting jobs, the supporting cast do pretty well. Worth mentioning are Tara as Ratnakka – that scene when she sees her son after 15 years, and bursts into tears, gave me goosebumps. Little Sohan Shetty as street-smart kiddo Democracy steals the show in many scenes. And Kishore as Munna, is the missing piece in the whole puzzle. He provides the much needed gravitas, the heart that glues the tale. His wide-eyed dreamy stoner romance makes you chuckle, and also leaves you sad. But of course, above all, this movie belongs to Rakshit Shetty. Not only as the onscreen lead dude, but also as the offscreen one.

On the surface,it looks like yet another South-Indian alpha male hero rescuing damsels-in-distress. But UK is not content with that template, and breaks the norms. It is a tall rebel, heck it’s the “Rebel Alliance” on its own, which even though has a vernacular language, its speech is loud and global in all respects. Shetty’s attempt at marrying the two, often looks effortless, but only shows the confidence in his craft. It is nothing short of groundbreaking. I am highly curious of what is coming up next on his filmography. If this is what the new wave of Kannada cinema has to offer, count me in. I will drive that hype train.

This has been the best of the London Indian Film Festival’s offering this year.

[Footnote: I have deliberatley tried not to tell you much about this movie, and would rather have you check it out for yourself. Ulidavaru Kandante is available as PPV on ReelBoxTV.com. However, it does not have any subtitles, but they are working on it. Follow them on twitter @ReelBoxTV to find out when this would be done.
The subtitles at my screening were quite funny. The swear words such as bastard and the like, had the vowels replaced with corresponding Greek symbols. That probably is because Director Rohit Shetty has not been able to completely get over his Engineering past!
Contact the director @rakshitshetty on twitter, make some noise, and probably he will bring this to a screen near you. It is definitely one to be experienced on the bigger screen, with booming sound. Or for you influential people out there, make Netlfix pick this gem up.]