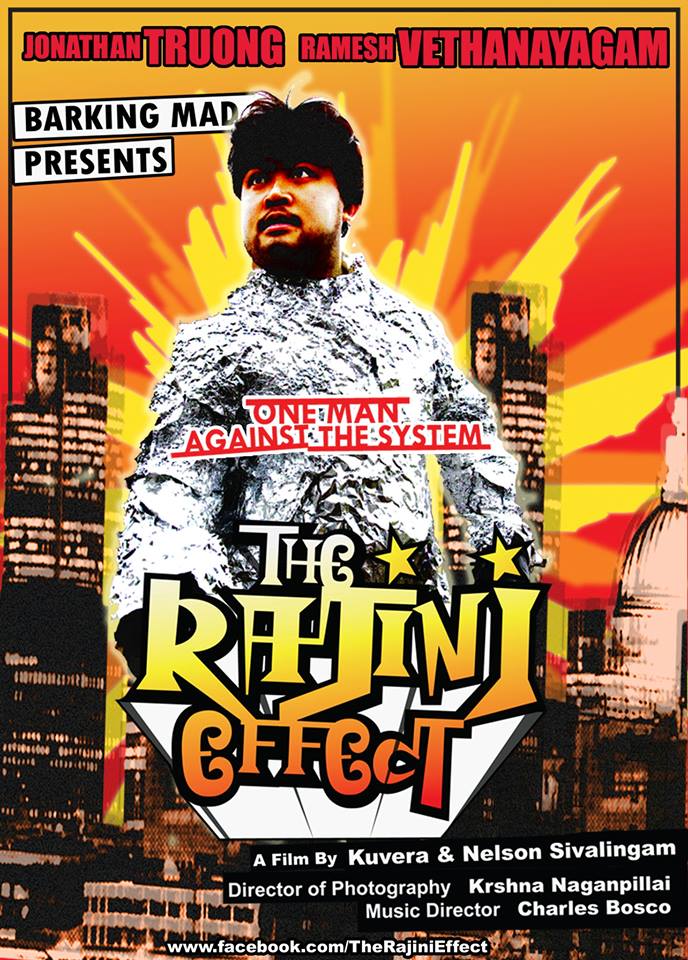 What does the “Rajini Effect” mean? It is extremely hard to encompass the meaning of these two words. No superlative feels adequate to describe the force of the superstardom and religious fan following of the one and the only Thalaivaar Rajinikanth. And so, kudos to debutante director-duo Kuvera and Nelson Sivalingam to have picked up such a monumental task upon themselves. And surprisingly somehow, they have been able to convey what the Rajini Effect stands for.

The Rajini Effect is what makes you wake up in the morning at 5 am, to travel 2 hours, and stand in the queue to get the tickets of a Rajini movie on the first day. It is the undying enthusiasm to fight the crowds and to uncontrollably whistle at the entry of the hero. It is the madness that makes you dance like a fool, trying to ape the Baasha, plastering your wall from corner to corner with Rajini images, and quoting dialogues even when you don’t know the language. All this dedication of a true hearted Rajini fan is shown through the story of our protagonist – Taiho (Jonathan Truong), a Japanese guy who has grown up watching Rajini movies and passionately loves them. When he comes across an advert for an Indian short film competiton looking for “Tomorrow’s Superstar”, he realises this to be his ticket to Kollywood (nickname for Tamil Cinema). Teaming up with his 50 year old Indian friend Ramu (who happens to be a budding filmmaker/accountant), they set out to make their mutual dreams come true.

In true melodramatic Kollywood style, this is life imitating art imitating life. I say that with the utmost love for this movie. It is an underdog story, like many of those Rajini movies. Our hero Taiho is a regular Joe, who is upset with his life, and seems his passion for Rajini movies to be his only outlet and also his true calling. Ramu, played exceptionally well by Ramesh Vethanayagam, juggles his life between satisfying his wife’s demands, his 9-6 work schedules, and attending to his true love – cinema. Through Ramu, we get a crash course in what South Indian cinema stands for. Not only do we get schooled on the “Feel” of a heroine romancing her loved one, but also how the Sari should be draped for maximum exposure of the belly.

Of course what follows next is quite predictable. The duo hit multiple road blocks, ranging from finding the correct female lead, to villains and their goons, to even the creative duo getting separated due to circumstances beyond their own control, and then eventually emerging triumphant. But, when I say predictable, make no assumption that it is boring; far from it. The script swims through these events smoothly, and the dialogue ensures that the audience is chuckling all the way. I believe I have never laughed so hard in a movie for a very long time, especially in an indie movie such as this.

I think the directors have used the indie movie feel to their utmost advantage. There is a movie within the movie, and this allows for shaky cam, amateur angles, guerilla filming, as well as not really spending on any exotic locales. After all, this is the story about a regular London guy trying to shoot his “Youtube movie”. But this alone cannot simply convey the Rajini effect, can it? The directors have a cure for that too. Weaved beautifully into the narrative, are some messages from many Rajini fans – from actors to journalists to just admirers, who in their own words try to express (and how) the essence of the Rajini effect.

The movie as a whole succeeds in conveying that very essence. There is a special scene where Ramu and Taiho, after having a fight and not being in contact for a while, agree to meet up and reconcile.

There is an awkward silence between the two when they meet. And then Taiho plays a Rajini song which depicts the meaning of friendship. Taiho and Ramu look at each other and smile instantly. The Rajini Effect is also that instant connect that you share with a fellow Rajini fan. Vethanayagam and Jonathan play it extremely well without a single false note.

And if just for that, for me, this movie achieved its goal.

For more info on the movie head over to www.TheRajiniEffect.com