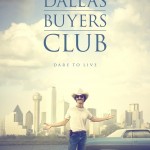 His skinny ass gonna sell you the right drugs

First up, I’ll be candid and say that if you’re even vaguely curious to see this film, then I would urge to act on that impulse and watch it. The recounting of Ron Woodruff’s post-AIDS life is a remarkable one and well worth sitting down for.

Ron, played by Matthew McConaughey is an AIDS patient who, discovering that better (approved) medication cannot be prescribed due to FDA regulations, takes matters into his own hands. Importing drugs from Mexico and elsewhere, Ron is forced to accept that his friends disown him because he’s “queer and a faggot” and starts a business relationship (the buyers club in question) with Rayon, a transgender woman he befriends in hospital. Brilliantly played by Jared Leto it must be said.

That’s really the nuts and bolts of the plot without divulging too much. But director Jean Marc Vallee delivers so much more – what we’re given is the journey of a dead man walking. Told by doctors he has 30 days to live we see Ron immediately retreat to booze, cocaine and hookers – his staple diet up to this point. But it is increasingly obvious that he looks so utterly fucked whenever he isn’t either in hospital or not drinking or drug taking, that he looks so much better. One of the many great things about Ron’s journey is that he has no choice but to confront his life and what he wants from what remains. He is a man of the rodeo, the macho and certainly not the queer (references to Rock Hudson help date the film and reveal his and his friends’ attitudes).

The relationship that develops between Leto and McConaughey really is quite beautiful and there are little touches with Marc Bolan photos that are impeccable. More than that however is the way that we see Ron’s own attitudes change – be it to drugs, homosexuals…mankind. Someone who starts off as the alpha-male, self-centred and narrow minded becomes motivated, responsible and resilient in the face of adversity.  McConaughey is as brilliant as you’ve heard and this movie will most likely change your perception of him as an actor.

Sadly, for those who are old enough to remember the AIDS crisis, or if you’ve watched How to Survive a Plague, then you will know that the way in which AIDS patients were treated back then is accurately portrayed in the film.  Patients were so desperate they really did take their life into their own hands and start mixing approved and unapproved drugs.  There was simply no other choice.

Dallas Buyers Club isn’t quite as lighthearted as the trailer would lead to believe, but has some cracking lines; “DEA?  I’ll be DOA!” and some truly memorable scenes such as checking if a hot girl has AIDS as well so they can have unprotected sex.  Of course, there are characters Ron meets along the way (notably law enforcement) but we’re not told a huge amount about them.  Rayon’s drug addiction isn’t explained and the bond between Ron and Dr Eve Saks (Jennifer Garner) is allowed to bubble away without developing into much.  It really doesn’t matter though.  Ultimately this is a character study of a man who refuses to give-up and simply wants to help others.  And brilliantly done it is too.