Review: Anchorman 2 – does the legend continue? 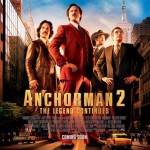 Joy of joys in the season of goodwill, my co-host Asim was unable to attend our screening of Anchorman 2. One man’s pain is another man’s gain.  It is a hard life, but sometimes you just have to take one for the team. That enthusiasm aside, I approached this movie with more than a hefty dose of caution, even scepticism. My bar was set low. Perhaps to protect me if it was mediocre and possibly to preserve the legacy of the first one.

Sometimes, when you love something so much, you just want more of the same, more of the good stuff.  Like an addiction to Cherry Coke or fizzy cola bottles you can keep stuffing your face until there is no more left and you have to demand more from the makers. I guess this is what happened with Anchorman. Fans – myself included – really were fans and took it to their hearts with a warm embrace, reeling off quote after quip, revelling in people being killed with tridents and women being seduced by Sex Panther.  But it wasn’t enough – how could it be? Genuinely strong characters, played quite perfectly by the cast, combined with surreal humour, a love story that ends happily ever after and a brilliant script with more take-home than your local Chinese.  All of which sets up the sequel nicely, but to what end? After almost 10 years away, how good is it and should you spend your hard earned cash on going to the cinema to see it?

So, after the hype, does the legend really continue?  Thankfully, at least for this lucky viewer, it does.  I can’t say how much I laughed, but I was literally lol-ing all movie which rarely happens in public.  As with the first one, there is an almost non-stop stream of gags and jokes throughout the whole film.  It’s almost unfair to talk about certain high points or low points without giving away some of the story, but suffice to say, if you liked the first one, you will not be disappointed!  I can also report that Kanye is only briefly appearing and is able to JUST ABOUT deliver his lines without spoiling the scene – worry ye not.

So, now that I’ve talked about one scene, I may as well keep going…my least favourite would have to be the dinner with Linda Jackson’s (Meagan Good)  family and not really because it’s unfunny, I just think it doesn’t add much and it also reminded me of shit Eddie Murphy movies that should forever remain purged from my brain.  I did find it hilarious when he moves in to a lighthouse though and you will also find proof that you shouldn’t ever travel with bowling balls and scorpions.  Much has been made of the large cast of stars and I can confirm there is indeed a long long list.  You’ll be ticking them off the list as you see them but there were so many at one point that I even missed Kirsten Dunst entirely.

Anchorman 2 also has the wit to have a pop at media ownership, the quality of broadcast news & what 24 hour news channels have done to change the ways we consume news.  Let me be clear: this is not biting satire and if like my mum, you “don’t do silly”, it’s not going to get you to enjoy it.  However, if you loved the first one, you do “do silly” (like me) & you love the gags coming thick and fast, both verbal and visual then Amnchorman 2 is in every way a winner and the legend does indeed continue.

Enjoy the trailer to whet your appetite – it’s not like you haven’t seen it already is it?