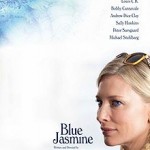 A Woody Allen movie, despite the annual appearance, is always an event.  Upod casts its eye over Blue Jasmine, his latest release.

Jasmine (Cate Blanchett) is a former New York socialite, broke (although still travelling 1st Class), homeless and a widow. She’s also a mess of prescription drugs and booze in a bid to cope with the nervous breakdown she’s going through in the aftermath of her life shattering. Moving to San Franciso to live with her sister Ginger (Sally Hawkins), this re-connects Jasmine (nee Jeanette) with her past and forces her to confront things she still doesn’t have the capacity to deal with. Her sense of denial is truly astonishing and it seems like she is incapable of moving on with her life. As the movie unfolds, we see through flashbacks exactly what happened to leave her in such a position.

Leaving university early as she was swept off her feet by financier Hal (very nicely played, Mr Alec Baldwin) she turns her back on friends and family, living high on the hog, all the while turning a blind eye to Hal’s incredibly dodgy business dealings and his pretty blatant affairs. Safely tucked-up in her world of Fendi bags and other pointless bagatelles, she also draws her sister’s husband into Hal’s murky financing, losing the family their $200 000 lottery winnings and causing the break-up between Ginger and Augie (Andrew Dice Clay).

As Jasmine’s present situation lurches through the various stages of better, worse, bad, good, rock bottom, positive, so we see more revealed about her past life. Whilst we know Hal is eventually arrested and sent to prison, we see their son walking out on his education (and his mum) in shame. He will not be able to stand the embarrassment of going back to Harvard and so leaves everything behind him. It is only later on that we see a woman truly scorned and after Hal confesses he’s in love with an au pair 20 years his junior, Jasmine calls in the Feds.

Ordinarily, that might not be considered a bad thing, but in this case our character cannot reconcile what she’s done with the consequences. We see her in an almost constant state of denial about everything she’s responsible for; brushing the means of her lifestyle under the carpet as we might if we bought a TV that “fell off the back of a lorry”. The reality she has constructed for herself is too painful to confront and so she clings to her past, blithely thinking all will get better. The superlative example of this being the diplomat she meets and wants to marry – it does not even cross her mind that her past cannot escape her.

Woody Allen has delivered us a fascinating look at the lives of others; in this case the filthy rich and socialites of Manhattan. In Jasmine we have one of the more selfish characters to grace a movie-screen, but we never sense it in a purely deliberate or hurtful way. Credit for this goes obviously to Cate Blanchett who, without wishing fall back on cliché, delivers a tour de force performance that will surely earn her the Best Actress gong next year. Blue Jasmine draws together themes such as sibling rivalry, keeping up with the joneses, family, snobbery, money & wealth, social mobility and finally and most simply of all, happiness. The ensemble cast is great and worth a mention absolutely, but such is the brilliance of the central performance they all but serve to further her role. The unpleasant truth for Jasmine and the matter she can’t get over is that she created her own mess – either through turning a blind eye or for reporting Hal to the authorities. She just can’t understand her son wanting nothing to do with her or that her sister can find happiness in a man who repairs cars for a living. There is plenty to take away and Blue Jasmine will get richer with repeat viewings. I already want to watch it again.

Blue Jasmine is released in cinemas across the UK today, Friday 27th September.  Enjoy the trailer below.