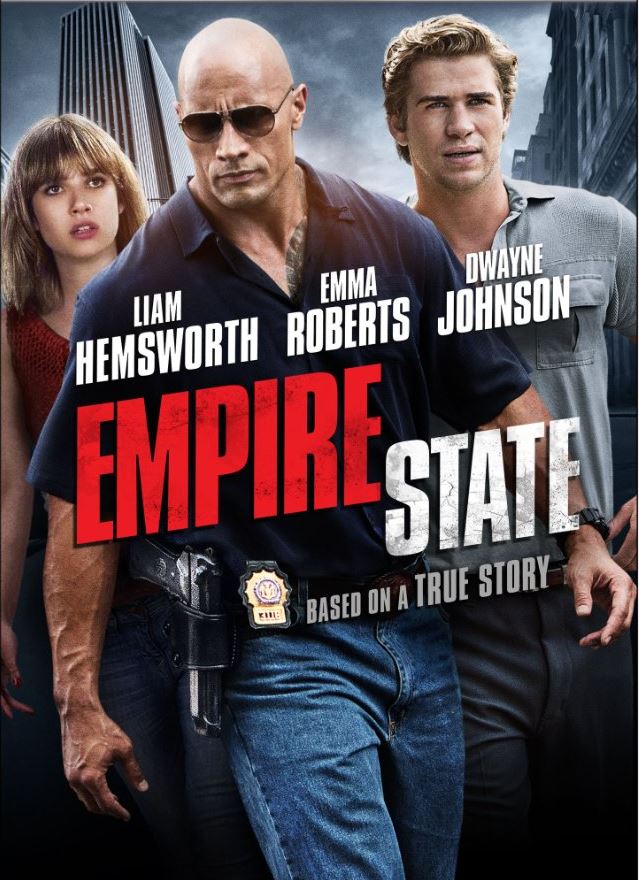 If the Chinese celebrated more than just animals in their yearly zodiac, then 2013 wouldn’t be the year of the snake, it would be the year of The Rock.  Our latest podcast talks about one of Dwayne Johnson’s many movies this year, Empire State.  Also featuring the lesser-spotted Hemsworth (Liam) and a largely irrelevant Emma Roberts, Dito Montiel’s early ’80s throw back about a real life heist in New York is our featured film.  The box-cover promises much, but will it take its place in the pantheon of classic heist movies, such as Riffifi, Heat, Inside Man, or even The Bank Job?  We’ll be the judge of that, thank you very much!

Here is the trailer of Empire State:

Ahmed brings a sad note to proceedings with news of Burn Notice’s farewell season. A great show and clearly the 21st century Magyver. That said, all good things must come to an end…but where will we go now for our fix of funnies, Bruce Campbell and impromptu lessons in how break locks and make bombs from kitchen supplies?

As the summer draws to a close, we start by reflecting on a somewhat lacklustre season of box office smashes. A few have delivered: Man of Steel & Iron Man 3, but instinctively we’re left underwhelmed, despite evidence that Hollywood is in fact up on last summer with its blockbusters AND the notable flops – The Lone Ranger and RIPD. New markets – Asia most notably – have helped score big time, but for how long can the studios get away with releasing the same movie twice? That means you Olympus has Fallen and Whitehouse Down.

No wonder then that Martin has been spending a lot of time at the British Film Institute in recent weeks, this time catching up on the restored silent Hitchcocks.  The Lodger, Blackmail, The Ring etc. – all from the earliest part of his career, in the 1920s.  However, of much more importance, was that Asim talked about the Twitter and Blog shredding news of Ben Affleck’s casting as Batman in the upcoming Superman films.  Batfleck or whatever you want to call him seems to be a uniquely Marmite choice in that you love it or hate it.  Ahmed then introduces us to Graceland – a new US TV show about undercover cops and FBI agents living in the confiscated house of a convicted Elvis-fanatic drug lord.  How does that not sound good?

More cerebral matters are up next with a chat about Keanu Reeves’ excellent doc. Side by Side, which charts the technological evolution of movies from 35mm film, through to today’s multi-platform, lack of common standards digital era.  That ought to be the high point…but Upod is also happy to bring you Mermaids.  Not the Cher/Danny de Vito/Winona Ryder effort from the early ’90s, but a documentary that seeks to prove their very existence.