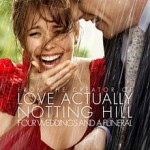 About Time is the latest film from British director Richard Curtis (Love Actually, Notting Hill, Four Weddings). A great cast of Brits, plus of course Rachel McAdams and Margot Robbie (Neighbours and the ill-fated/rubbish Pan-Am). With the exception of those Blackadder episodes and The Boat that Rocked, usually a “new Richard Curtis” breaks me out in a cold sweat, so, what lies in store?

At the age of 21, Tim Lake (Domhnall Gleeson) discovers he can travel in time. After yet another crap New Year party (yep, I can relate to that), Tim’s father (Bill Nighy) tells his son that the men in his family have always been able to travel in time. Tim cannot change history, but he can change what happens and has happened to his own life—so he decides to make his world a better place by getting a girlfriend (Mary, played by McAdams) Accidentally wiping out the timeline, he must try and win her back once again.

Not a bad set-up that, to start! But, if like me, you’re used to Curtis’ way of doing things, then I think you will tire. Tim already has a pretty sweet life by most people’s imagination (he’s studying for the bar…not the one that serves alcohol) and the locations also reflect this. Gorgeous place on the coast with the parents and a mighty impressive gaff (owned by playwright Tom Hollander) in London. I also could not get Groundhog Day out of my head, nor the Time Traveller’s Wife. So, we’ve got a typically well put together and lush looking movie that we’ve come to expect. I do think it’s easy to pick holes in time travel movies and I won’t dwell on that here – you will see the example I’m alluding to. Kudos for taking time travel out of the realm of science-fiction though; the intention is to be applauded.

Basically it’s Gleeson and McAdams who hold this movie together – great casting or just lucking out? I’m not sure, but they’re brilliant. I also really liked the soundtrack, so this combined with some of the funnies and high quality production mean that this is a decent, if not great date movie. I guess as a viewer, either you buy into the notion that Tim chasing Mary back through time…and again…and again, is really worth the message that his father delivers. That the gift of time travel is to make your life better…as good as it can be. I don’t quite buy into that and so we have an end product that’s a tad anodyne for my liking as you’ve probably guessed.

About Time opens in the UK on September 4th.