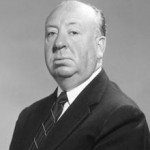 Hitch, in one of his lighter moods

In honour of what would have been Alfred Hitchcock‘s 114th birthday this August, Upodcasting is delighted to shed some light on the great man’s films, legacy and influences.  Kicking things of for us, is this wonderful introduction by Elizabeth Eckhart.  One or two more articles celebrating Hitch will appear in the coming days.

Few filmmakers have had the sort of enduring influence that Alfred Hitchcock has had. He was innovative, contemplative, and it’s clear that he understood that film was truly the synthesis of all artistic practices. He understood, with seemingly greater clarity than anyone who came before or after, how technical and narrative devices could operate in tandem with one another to heighten drama and make for a more engaging (and believable) cinematic experience for the viewer.

For instance, he demonstrated a sophisticated understanding of how camera effects could illustrate something about the perceptions or internal struggle of a character on-screen, such as the “zolly” or “reverse tracking shot” he pioneered for the film Vertigo (See here.) But beyond merely his technical achievements (and certainly, he made many of those) the things that make Hitchcock truly fascinating to modern students of cinema are his more abstract flourishes.

For example, Hitchcock films were often self-reflexive and toyed with notions of reality. He reinforced, perhaps more than any other filmmaker ever, what the term “diegesis” truly means when describing the various layers of artificial reality within the film world.

Diegesis relates to the narrative sphere within a literary or cinematic work. As a theatrical term, historically diegesis may be differentiated from mimesis in that diegesis deals with narrative details that are given to the audience orally (through narration itself), whereas with mimesis, pieces of the narrative are articulated through action or movement.

Within the context of film specifically, diegesis is commonly used to discuss a self-contained internal reality inhabited by the characters; it may encompass the narrative “space” and may include fragments of the narrative, but also histories and events that are never depicted on-screen – such as events and actions which preceded the action of the story, or characters who are discussed, and thought to inhabit the artificial reality within the film, but may never be shown.

When we talk about “diegetic sound” in film, we are talking about sounds which are being made “actually” within the sphere of action in the film. In other words, if a character sits down to play a piano, or you see and hear a choir singing, or if a character plays a record on a record player, the sound is diegetic. If the sound is being superimposed over the film, and a sound cannot be traced to a “real” source within the constructed “reality” of a film (i.e., music that is being played over credits at the beginning or end of a film) than the sound is either “non-diegetic” or “extra-diegetic.”

Consider Hitchcock’s film The Birds (1963) does not use any non-diegetic or extra diegetic music. Sure, he used analog synthesizers to create the screeching sounds of the birds, but those sounds are all attributed to “natural” occurrences within the narrative sphere of the film.

The film Rear Window, which is itself largely a commentary on media consumption and discusses film, TV and mass media as having inherently voyeuristic qualities, ironically features diegetic sound almost exclusively — all of the sounds and music the audience hears are attributed to some sort of “real” source within the narrative sphere of the music. This is interesting, as it presents diegetic sound mimicking the function of non-diegetic sound and music in film and television. James Stewart‘s character is spying on his neighbours, but look at how it plays out! Look at the highly stylised dramatic nature of the supposedly “real world” occurrence he is watching!

Hitchcock will be forever treasured by filmmakers, viewers, and scholars alike for his innumerable contributions to the world of cinema – which makes it all the more tragic that so many contemporary makers seem to fixate on the most titillating and intellectually pedestrian pieces of his body of work (namely, sex and murder). Let us hope that, in years to come, more filmmakers will produce works that reveal a more complete understanding and appreciation for the complexity of his craft — which would mean that they, essentially, have a better comprehension of what the medium has the potential to do.

Author Bio: Elizabeth is a film blogger for Direct-ticket.net where she writes about film, television, and sports. She is an avid film watcher, and among her favourite directors are Alfred Hitchcock, Ingmar Bergman, and Werner Herzog. Elizabeth lives at home with her tabby cat named Mochi.