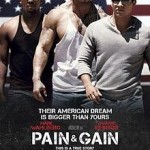 Your pain, their gain, our laughs

A good title for this movie I have to say.  Adapted from a truly horrific real life story Michael Bay‘s newest on screen adventure is a crime-comedy starring Mark Wahlberg, Dwayne Johnson and Anthony Mackie. The film is based on a story published in a 1999 series of Miami New Times articles written by Pete Collins and compiled in his book Pain & Gain: This is a True Story, which details the kidnapping, extortion, torture, and murder of several victims by criminals that included a number of bodybuilders affiliated with the Sun Gym.

After being inspired by motivational speaker Johnny Wu (a hilarious Ken Jeong character) and his women, money, boats etc, Lugo persuades John Mese, the gym’s owner (Rob Corddry) to be part of his scheme, as a notary.  With the other beefcakes along for the ride, things start to get ugly.

Things I liked about P&G abound – there’s a lot to like.  Dwayne Johnson (Paul Doyle) is excellent and Marky Wahlberg  (Daniel Lugo) perfectly cast.  Ever wanted to see Dwayne Johnson as an evangelical Christian, recovering alcoholic and cocaine addict?  To be fair, that thought had probably never crossed your mind, but now’s your chance.  Anthony Mackie (playing Adrian Doorbal) who I’d not really seen in anything other than Hurt Locker is excellent as the even less bright 1 of the 3, playing the part of an impotent steroid-using body builder.

Ed Harris (Ed Du Bois III) has his moments and is as convincing as can be as the private detective who takes up the case after the local police dismiss the complaints of Victor Kershaw (Tony Shalhoub) as the ravings of a madman.  It is this that I found perhaps the most interesting.  Whilst he is utterly abused and tortured, there is very little sympathy for him.  Not in the sense that he deserves it perhaps, but that he is such an unpleasant man, that even his employees prefer Lugo as their boss. In turn, I ended up siding with the bad guys.

Quite clearly it pays to be inept at crime.  For a short while at least.

Also livening-up proceedings is Rebel Wilson (Robin).  This time she plays Doorbal’s love interest.  And when she is scorned, boy does she not hold anything back – her line in the court scene near the end is brilliant.

So, that’s what’s hot, but what’s not?  Not much to be fair.  I understand some of the criticism levelled at the movie has come from its light-hearted take on what is of course a terrible story.  However, whilst Pain and Gain takes the less horrendous aspects and presents them accordingly, it is by no means played exclusively for laughs. Michael Bay does still find time for some lovely shots of helicopters, which are frankly unnecessary and I think it’s quite natural that those more familiar with the true story will object to the portrayal of 3 hugely despicable human beings.

Other criticism has been that there is perhaps too much poetic licence…that for example we have a made-up character and a semi-made-up character in key roles.  To this, I say nonsense.  Using our podcast to come for example, about Empire State, this would have worked so much better if someone had tried to be inventive or creative with an existing story.  Just because something is true, doesn’t necessarily make it interesting straight out of the can.

In light of this and my blog’s title, it’s interesting to note that this only cost $26 million.  Partly because Mark Wahlberg and Dwayne Johnson are taking profit-share and of course partly because there are so few complicated action set-pieces, car chases, guns and special effects.  All credit to Michael Bay for directing this and for apparently loving the project from day one.  I am notoriously hard on “Michael-every shot’s a shot-Bay” but I genuinely believe this is his best film.  I do love The Rock  and Bad Boys, but they take themselves very…way too seriously.  Perhaps this is the dawn of a era for Bay.  Enough of the robots and the excessive CGI; get some budget, some great casting, a believable storyline & decent script and show us what you’ve got.  The camerawork has never been my contention in his films and Pain and Gain shows how effective he can be without all of the nonsense a $100m+ budget can bring.

Thanks Mike, for this one.

Pain and Gain previews this week and opens August 30th in UK cinemas.  Enjoy the trailer below