The Evil Dead: coming to your home from August 12th 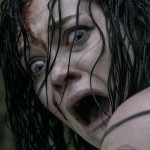 Released this Monday, August 12th, the DVD and Blu-Ray of Evil Dead, one of my movies of the year so far.  A fitting remake for the 21st century, this has some things the original lacks: consistently good acting across all the cast, special effects and budget.  That’s not to slag the original which is an all time favourite of mine, but I do feel it was ripe for updating.  A little synopsis and the trailer are below so you know a bit about what’s coming if you haven’t seen either this or the first.  Happily I can also say that the sequel has been agreed, so there will be more gore to come!

Is it me, or is it raining blood?

A remote cabin in the woods (reminds you of another movie you may have seen last year?) becomes a blood-soaked chamber of horrors when a group of 20-something friends unwittingly awakens an ancient demon in Evil Dead, the brilliant reworking of Sam Raimi’s 1981 cult-hit horror film The Evil Dead. Starring Jane Levy (Suburgatory), Shiloh Fernandez (Red Riding Hood), Lou Taylor Pucci (Carriers), Jessica Lucas (Cloverfield) and Elizabeth Blackmore (Legend of the Seeker), Evil Dead is a bone-chilling film that combines all the raw excitement and gleeful gore of the acclaimed original with a series of shocking new twists.

For fans, there are some special releases: