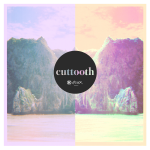 For those of you who’ve seen the video I posted on here last week – Without You by Lapalux – that may give a clue as to the music I like to listen to. Down-tempo, not with a 4:4 (or, even worse, 4 to the floor David Guetta style) beat and falling generally under the umbrella of “IDM” (intelligent dance music) / electronica is definitely my thing right now. Cue my delight at Cuttooth asking me to review his latest release on the 4LuxWhite label.

His style is centred around solid boom-bap drums and complex, cinematic tones overlaid with abstract lead lines and airy, layered vocals. Cuttooth also puts a lot of focus on how a sound feels and relates to the rest of the track spatially and harmonically, which gives a lot of depth and a sense of place.  It’s also pretty clear he’s a big fan of the lo-fi aesthetic (the original concept was that the record should sound like an old cassette tape), and loves to overdub his tracks with crackle, hiss, hum and other noises that most sound engineers spend their careers eradicating.

My personal favourites are the 2 tracks with Hitomi on vocals (Old Tape Machine and Illusion Symptom) and the tracks that come in over the 3 minute mark.  This is certainly a reflection of my recent listens – Mala, Gas Lamp Killer, Flying Lotus for example – and I think there’s plenty of scope to really open up for some longer tracks on future releases.  I really hate to pigeon-hole music and artists, but if pushed I’ll mash these together: trip-hop in a post dub-step time…without glitchiness.

Nick ‘Cuttooth’ Cooke himself is a producer from Newcastle Upon Tyne in north east England. Having started out producing for hip-hop groups and competing in scratch battles, Cuttooth moved into more instrumental, blunted beat territory a few years ago and released his first album, Elements on Psychonavigation in 2011. Originally conceived as an EP, this record evolved from some recording sessions with Bridie Jackson and Kiki Hitomi in early 2012 and grew into the LP that I’ve been listening to twice a day for the past week!

Cuttooth is currently working on an EP with the very talented Eliza Shaddad, which should be out sometime over the next few months and then a hip-hop instrumental EP coming out on Plynt, who are a Belgian imprint. There’s also a single with Juice Aleem to come so there’s plenty still in store for the rest of 2013.  Alas, Nick is firmly a producer and so we can’t get the chance to see him perform live.

When I spoke to Nick, he said he’s just starting to collate ideas for the next Cuttooth record, which may be an LP or even an EP.  The idea is to get some demos done for that by the Autumn and get it onto a label with a view to release next year. Given the impeccable choice of vocalists on the Cuttooth album, I’m sure he’s got a wishlist of artists for collaboration: “…the first thing I’m going to do is write the stuff for the singers (as that’s gonna be what really sells it to prospective labels), get those tracks down first and then work on the instrumental stuff towards the end of this year/start of 2014.” he said.  Next year is shaping up to be a busy one indeed.

You can find more of Cuttooth on Soundcloud here and here.  The Cuttooth LP is available for download on Friday 21st June from all of the usual suspects. 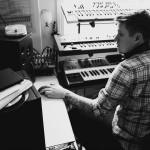