A Haunted House Review: More laughs than the Hangover 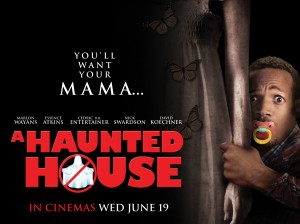 The Wayans have a particular brand of humor that straddles the line between spoof and gross out comedy combining it with what can be described as FLAVA.

It gets derided by critics as low bro when it comes to movies like Little Man and White Chicks, or put in the same category as Friedberg – Seltzer comedies especially as they took over the Scary Movie franchise over from the Wayans, burn it to the ground and then built a ridiculous million dollar empire on it.

But I pretty much love all of the Wayans, from the first time I saw “I’m Gonna Get You Sucka” directed, written and produced by Keenon Ivory Wayans (who also wrote part of Eddie Murphy’s RAW) back in ’88 all the way to Damion Wayans Jr, in the recently canceled Happy Endings, a show that like Arrested Development, people will be rediscovering and loving in years to come.

Marlon Wayans was probably the one that got the closest to breaking through to mainstream audiences having worked in the GI Joe movies as well as getting quite a bit of praise in the Arronofsky addiction themed gut punch Requiem for a Dream. (One of my favorites of his was Senseless though; probably available in bargain bins)

A Haunted House makes as much sense as the movies it’s making fun of, Malcolm and Keisha move in together and soon realize that Keisha is being followed by a Demon as she sold her soul for a pair of shoes. To catch the presence Malcolm places cameras everywhere in the house and then humps a stuffed toy and Keisha break dances while possessed.

They are visited by priests, ghost hunters and psychics whilst their sexually deranged friends have mandingo parties in the garden shed.

Comedies are hard to argue, if you find any of the above funny than you will probably have a great time, even if some jokes are truly juvenile but the sincerity with which they are unrelentlessly delivered  cracked me up even when I didn’t want it to. ( I realized that seeing a man dessicrate the ashes of his father in law was something that did indeed make me laugh as i had been wrestling with that question for a while now). There is quite a bit of male nudity in the most unnappealing manner and the fart jokes (a staple for Wayans comedies) are what they are.

Haunted House does a good job of keeping a relentless pace of jokes coming in within the framework of the Paranomal Activity franchise, when it tries to expand and add to the story line by deviating into other movie franchises that’s when the movie begins to falter.  Lucky for us that is the moment that Cedric The Entertainer makes his entry and his jail house pastor, is just non stop hilarious.

Supported by some excellent comedic actors like David Koechner, Affion Crockett and even JB Smooth (LONG BALLS!) and a very likable main lead pair, Haunted House made me laugh out more than any of the Hangover movies did. And it does so with an unbelievably tight budget and funnier dead animal jokes

The trailer gives you a pretty good idea of what the movie is like, so give it a shot if it’s your cup of tea or if you like me like the Wayans brand of humour, it’s out in theaters this week in the UK.

3 thoughts on “A Haunted House Review: More laughs than the Hangover”