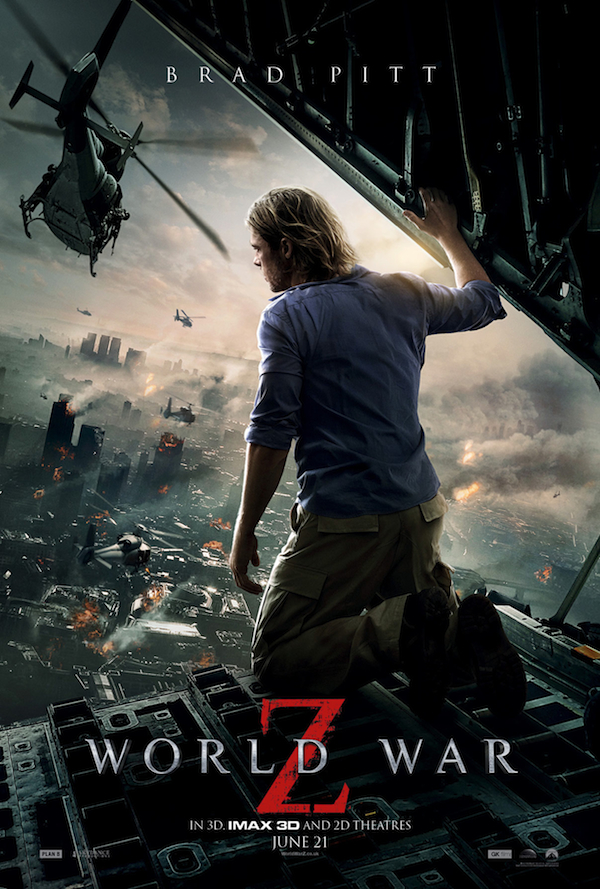 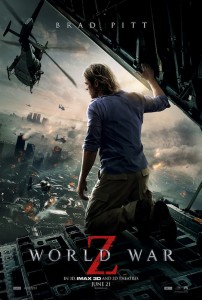 World War Z produced by Brad Pitt’s company Plan B had an uphill PR battle to face up to it’s release.

The movie was a very heavy departure from the original source material by Max Brook’s zombie novel, which was a series of interviews of zombie apocalypse survivors where as the movie is more of the established action genre.

Director Marc Foster who has quite a few good movies on his resume is mostly remembered for unfortunate Quantum Of Solace, which audiences were disappointed with after Casino Royale. (I would opine they are wrong and QoS is quite a fun movie with some minor issues)

And on top of that, ongoing rumors were seeping through all through out the production.  Stories of delays, rewrites and reshoot, inflating budgets just up until the release of the movie, you can check out this piece from THR for more info (click here)

But I am glad to say that WWZ rises above all of those issues by climbing over a massive zombie wall and being a fun although gore-less globetrotting zombie adventure movie.

Not only is the movie beautiful to look at it but also adds something to the zombie genre of which we have seen so many different iterations from comedy, to rom- com to the classic horror genre.Just like Danny Boyle’s 28 Days Later, we are dealing with speeded up zombies that run, jump and move at breakneck speed with the difference that they are sensitive to sound instead of smell, creating a very tense climactic set piece set in Wales.

But where WWZ differs more importantly from 28 days is that it has a sense of optimism towards humanity that I found quite refreshing.

People generally help each other out even when facing the worst possible situations, the armed forces and even politicians seems to be inherently good people and this lack of cynism was just a welcome change for once.

Brad Pitt plays the most important man in the world with an ugly haircut, who quit his job as a UN investigator to be with his wife played by The Killing’s Mireille Enos and two daughters.

On their daily commute a zombie outbreak starts that forces him to take charge and join his former boss’s (Fana Mokoena) mission to find a cure for the outbreak by travelling to South Korea, Israel and Wales whilst the whole world is being devoured by zombies and most of the political leaders are dead.

The movie has some amazing action set pieces and moves at a breakneck speed, it is shot beautifully by DOP Ben Seresin and uses that speed and beauty to camouflage the plot holes and editing problems (of which there are quite a few- like the ending).

Some actors appear and disappear (Matthew Fox from Lost was apparently in this but I don’t even recall a scene with him) and if every location wasn’t bookended with a zombie attack you might start to wonder what the point of that visit actually was to the overall solution to the zombie plague.

WWZ also has a PG-13 certificate, which might bring in a bigger audience but for a zombie film it works to its detriment. Some scenes were missing their full impact because of the way the camera cut off.

The CG in the zombie crowd scenes looks iffy but it would have been unfeasible to shoot it in any other way, but the digital effect team could have definitely used a bit more time and budget to chisel out the kinks. Sometimes the zombies look like the vampires in I Am Legend and this isn’t a good thing.

The 3D in the movie is pointless and must be avoided at all costs. It only managed to give me a headache.

Brad Pitt plays Brad Pitt very competently; he manages to capture the frustrations and love for his family as well as being extremely competent in tough situations. He is supported by a wonderful cast of which you wish you saw more of as sometimes it feels Pitt is just in every scene. (You have Peter Capaldi in this and he doesn’t even get to swear that much)

I went in with very low expectation and came out having had a great time.

I would definitely recommend World War Z, just don’t see it in 3D.