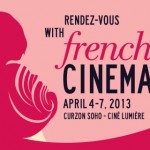 Never let it be said Upod lacks flair, sophistication or an eye for the unusual. Starting today, April 4th, Rendez-Vous with French Cinema is back in London for its 4th edition, with fantastic films and a host of famous actors and directors descending on Curzon Soho and Ciné Lumière for four days packed with treats and discoveries.

From the eye-popping Populaire, a sparkling film with a vintage feel, to the quiet charm of the impeccably crafted Renoir, not to mention the warm and winning Cycling with Molière starring Fabrice Luchini and Lambert Wilson, Rendez-Vous with French Cinema will give you a panorama of the latest and hottest films from France.

Get ready to meet your favourite actors: French hearthrob Romain Duris for a Q&A after Populaire, and the intriguing and exquisite Oscar-nominee Kristin Scott Thomas during her exclusive on-stage interview.

This festival is also an ideal opportunity to get behind the scenes of the newest films, with directors Gilles Bourdos, Régis Roinsard, Philippe Le Guay coming in after the screenings of their respective films to answer all of your questions. You can also discover France’s rising stars, from the enchanting Déborah François who won the César award for Most Promising Actress to Christa Theret, who plays with a shining mix of fragility, melancholy and charisma.
The festival is fast approaching… don’t miss your Rendez-Vous with French Cinema!