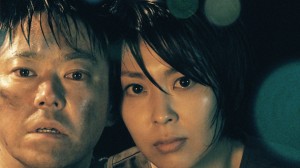 Their dreams are for sale

A young and in-love couple Kanya (Sadawo Abe) and Satoko (Takako Matsu) see their restaurant burn down in an accident and their savings are wiped out by a compensation claim. Not knowing where to turn or what to do. Kanya has a drunken one-night stand with a woman he meets on the subway, and emerges from it with a cash windfall. Once she’s able to forgive her husband, Satoko sees a solution: she pushes Kanya into feigning marriage proposals to a series of vulnerable women, fuelling them with hard-luck stories which persuade them to part with their savings…

First off, I really liked this film. Not having seen any of Miwa Nishikawa’s other 3 movies I can’t say where this one ranks, but it makes me want to watch them. Gentle accoustic guitar accompanies the opening shots, showing domestic bliss, boredom and banalities. This shot is echoed much later in the film once the whole episode has unfolded and played out. If like me you look at the scenario above and think “bloody hell, this cannot possibly work out well” then you’d be right. And you’d also be wrong.

Dreams for sale addresses themes of love, marriage, revenge, growing up, what it means to be in a relationship and how easy it is to be hurt by someone, especially when you love them – and with much skill. I will put this down to great performances from Sadawo Abe and Takaku Matsu, in conjunction with a great script. There are some seriously telling lines and scenes. Sadawo brings so much to Kanya’s character; moments of joy, comedy, terror, helplessness and slapstick (literally). And with Satako, Matsu shows us cunning, loyalty, despair, leadership and forgiveness. At the heart of the movie however is love between the couple and no matter what the hair-brained, ill-thought schemes, both Sato and Kanya are clearly in love with one another, despite a couple of wobbles along the way.

As the film draws to a close and the inevitable conclusion of their fraud is revealed, yet more sacrifice is required to save their relationship. I can’t really say much more than that without spoiling the thing – just trust me. With a running time of 137 minutes, this doesn’t technically qualify as a gem of a film and if I was being harsh I’d say a few minutes less would serve it well…but that is being picky. It’s set at pretty much a perfect pace and it suits the character of the film. Not one for switching-off to, but wonderful in any case, it left me feeling just a little bit heart broken.