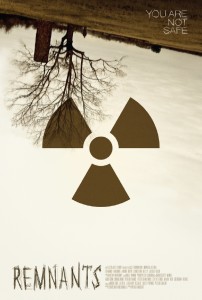 Here is a review from our guest blogger Miss FooFantastic from FrightFest in London, she’ll be posting a couple of reviews here, so if you are a horror fan, keep your eye out for them.

A movie such as Remnants is a perfect example of Frightfest being more than just about films dedicated to showing flying limbs, blood splatters, or creepy supernatural forces terrorizing us humans. Frightfest movies are not all purely about blood and gore: it’s about anything that can make anyone feel uncomfortable. Director Peter Engert shows us a bleak scenario of the future with his movie Remnants, which can feel frightening for a lot of people, especially if you expect the world to end anytime soon.

I had completely different expectations of this movie; therefore I guess these expectations did affect my overall opinion of it. Introduced as a post-apocalyptic movie, taking place after World War III, Remnants is about a group of strangers ending up together in a cellar in rural Texas, struggling for their survival. The introduction on the Frightfest site also mentioned the main characters fending off ‘…hordes of terrified, dying refugees as they attempt to endure the devastating holocaust’. Well, unfortunately in my mind I translated that into some degree of zombie action (I guess that’s what happens when you watch so many horror movies). Although some zombie-like characters appear in the movie, they’re not really as you would expect, and that’s as close to a zombie you’ll see in this movie.

The main character is a young doctor named Hunter (C.J. Thomason), who ends up seeking shelter with 8 other random people in a dark cellar, in order to avoid radiation exposure from a recent nuclear attack. Among this group you’ll find the typical range of different characters: the traumatised nervous young girl, the confident woman, the old grandpa that will die sooner or later anyway. Of course a stereotypical angry redneck cannot be avoided if you have the movie taking place in rural Texas, and here is where we meet Brad (Edward Furlong), who’s with his pregnant wife (another must-have in situations where random strangers end up together). Since the majority of the movie takes place within a dark cellar room, you can imagine claustrophobia and the accompanying human reactions to feature heavily in the film, and it did. Unnecessary fights breaking out, tough decisions to be made, the movie did do a good job in capturing the tension, anguish, and despair the characters are experiencing.

Towards the end, the movie goes into the weirdest transition of camera style ever, which left me somewhat confused as I thought the movie was ending there, but it didn’t. Instead, you had a few shots of the alternative camera style, and then it continued again to its usual style for another 10 minutes or so. I’m not really sure what the intention of this was, but once the movie ended, my mind was more engaged with what was behind that camera style switch than with the whole movie.

Overall, the movie does leave you feeling a bit grim. Although I’d say it’s partly feeling grim about the fate of the main characters, but also partly about the disappointment of having watched 90, mostly uneventful, minutes of a bunch of people stuck in a cellar. What’s interesting is that the movie does show a more plausible concept of ‘zombies’. This does mean though that you won’t be seeing any quick-paced raging 28 Days later type of zombies, nor the classic slow, brain-eating ones. Although it was an interesting concept, if could have been executed better in my opinion. The movie is too much skewed towards drama, and is missing any true classic horror elements.

Watch this if: you’re more of a fan of dramatic movies, rather than your typical horror movie. Remnants is more about human behaviour in times of despair rather than anything else.

Don’t watch this if: you envisage the end of the world to feature zombies in the ‘traditional’ sense, such as in 28 Days later, The Walking Dead etc.