The Flowers of War Trailer 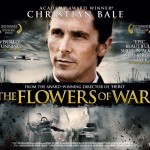 Remember last year when Christian Bale almost got arrested in China for visiting blind legal activist Chen Guangcheng, who had been under house arrest for more than 15 months in his village at that time? Well he was actually in China at that moment shooting The Flowers of War for director Zhang Yimou. The movie was released last year in some countries and festivals and has garnered some acclaim and is now finally seeing a UK Release (probably timed with that other Bale release)

Shot beautifully but dealing with a really horrific chapter of history, we’ll get to see another side of Bale.

The story is according to imdb:

“A Westerner finds refuge with a group of women in a church during Japan’s rape of Nanking in 1937. Posing as a priest, he attempts to lead the women to safety”

The trailer looks like the movie is shot on a really grand scale but you’ll need guts to probably finish the movie as it deals with some real horror and although some might hope Bale will just suit up and solve problems with batarangs, I don’t think it will be happening. (actually just reading up about The Rape of Nanking on wikipedia, I’m feeling bad making jokes about it)

The movie releases exclusively in Empire Cinemas in theaters 3 August and surprisingly releases on DVD only 3 days after that on the 6th.

The Flowers Of War is showing exclusively at Empire Cinemas from August 3rd 2012. For information and to book tickets visit www.EmpireCinemas.co.uk or call 08 714 714 714.