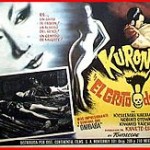 Black cats, unlucky for some

As July draws to a close, so does the small-scale marathon I’ve undertaken at the British Film Institute this month. I’ve already written about a classic Japanese horror, Onibaba but last week I had the fortune to watch Kuroneko, another Japanese film from the same genre.

Very much a companion piece to Onibaba, Kuroneko is also directed by Kaneto Shindo – shot 4 years later and with two of the actors (Kei Sato and Nobuko Otawa).

This brief synopsis shows the similarities of the 2 movies: a woman & daughter in-law live in a hut, on the edge of some woods and, as with Onibaba, we learn that the daughter’s husband is away fighting in the civil war. A group of soldiers appears, helping themselves to food and water before raping and killing the 2 women. We see a black cat licking at the two bodies and the hut is burned to the ground. Some time later, samurai start to die mysteriously.

And that, however, is where the similarities end.  I noted the almost claustrophobic feeling of Onibaba and Kuroneko spares us this.  It is a more open film, not with its head down in the reeds and rushes and is able to at least let us feel like we can breathe.  Whilst not particularly pleasant, one of the stand-out scenes for me is the opening sequence.  We see a group of soldiers emerge from the forest; the sound is silent & we can can hear only the wind in the trees.  Once the men reach the water, they bend down, like animals to a trough.  The sound is enhanced and there is no dialogue, just the noises of the slurping as their thirst is slaked.  Once the men enter the hut, there is also little if no conversation – merely grunting as the men help themselves to the women’s food, before the rape.  The scene ends as the soldiers retreat back to the forest – assimilated back from whence they came – and the hut is left to burn to the ground.

One of the clever tricks that Shindo plays is to tell us that the women have been taken over by the (vengeful) spirit of the demon as a black cat, without showing us fully.  We see glimpses of a long mane of hair, feline features from a distance or a hair covered arm, but never “cat women” as such.  Indeed, there is a scene near the end, that sent a full on chill right the way down my spine and is the culmination of all of these clever little shots.

I really enjoyed Kuroneko, possibly more so than Onibaba even.  It’s never going to rival anything from the modern horror catalogue – Saw, The Ring, Nightmare on Elm Street etc – in terms of blood and gore, but it has the feeling of being crafted, of being a film about human nature, myth and superstition.  It does of course have its moments of absolute terror (and humour) and so to have started my journey into Japanese horror movies with these two fine examples, makes me feel a tad lucky.  Next stop on the journey will have to be Kwaidan, Masaki Kobayashi‘s renowned shocker from 1964.