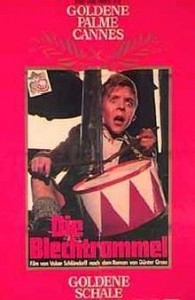 Take it from him, I dare you

AKA Martin’s continuing voyage into yet more “weird old movies”.  If you thought I might have struggled with Onibaba‘s oddities and very loose write-up then that was a cake walk by comparison to what follows.  At least there is nothing really to hold back from in terms of plot / story and spoilers with Tin Drum.  Die Blechtrommel as known in its native Germany is one of the most startling films I’ve ever seen (along with Old Boy and Last Year in Marienbad).
Based on the acclaimed novel by the same name, from Gunter Grass, Tin Drum recounts the life of Oskar, a young boy who, when he sees the adult world around him does not like it one bit.  Aged 3 he is given a tin drum by his mother, but in disgust at the thought of becoming an adult, throws himself down a staircase and stops growing thereafter.  Oskar’s life runs parallel to the rise of the Nazis in Germany and this is where the allegory at the core of the novel lies.
For someone so young Oskar shows a remarkable ability to manipulate those around him in order to maintain what is essentially his deception.  Constantly banging on his tin drum he is disruptive at the threat of it being taken away, screeching and screaming at such a pitch that he can shatter and etch glass at will.  This makes for memorable scenes, although I do confess to wanting to snatch the wretched thing away from him, smash it to pieces and send him to bed early.
The film is set in Danzig (modern day Gdansk), the so-called free city in Poland, between the world wars.  Reflecting the duality of this setting are Oskar’s 2 fathers; the biological father being a Pole and the familial being a German.  As Oskar grows – he remains in the child’s body – so we see the return to growth of the German economy and in turn Nazism.  Not even Oskar’s drumming can prevent the march of Hitler – despite his wreaking havoc at a local rally, by making the other musicians play out of time and switch from a military march to a Viennese waltz.  A standout scene in the movie, in part for its outright humour and obvious subversion of something we know to be malevolent.  He is of course, ultimately powerless to stop the events of Kristallnacht and the armed struggle at the Polish post-office in Danzig, unfolding: both depicted in Blechtrommel.
As Oskar grows (remaining in the same body) and develops the film shows us some potent sexual images that would have the MPAA foaming at the mouth.  And I use this expression deliberately.  For the squeamish there is also a scene involving a horses head and some eels: you have been warned.  Equally, it is fair to say that as much as Oskar develops emotionally, he remains stunted in many ways.  Indeed, we can attribute the death of at least 3 people directly to his refusal to countenance any kind of growing up and taking wider responsibility for his childish actions.
I won’t divulge the ending of the movie.  Not because it’s a spoiler, but because the film doesn’t span the whole life of Oskar, as per the book.  Indeed, I have omitted many memorable scenes, not least the opening sequence which is mirrored in the closing scene.  I hope that what I have tried to explain thus far is intriguing enough to put this movie on your watch list – it is genuine work of art that will sustain multiple viewings – and reading the book.  Dark, strange and unpleasant as it may be, we are all the better for this movie existing at all.  Quite who would have the gumption to produce this nowadays I don’t know.  Maybe it is a product of its time – certainly the 70s were an incredible period in cinema (German in particular) – and perhaps it’s a one-off.  The scope and ambition in transferring this from page to celluloid is to be admired and I look forward to someone having the same vision in our own times.  Volker Schlondorff was approached to direct based on his previous good form in adapting novels for the big screen, but when it comes to contemporary directors I have no suggestions whatsoever.
Mesmerising, gruesome, unpleasant, bewildering but richly rewarding and haunting, The Tin Drum is certainly one the finest pieces of cinema I’ve seen.
@martincawley