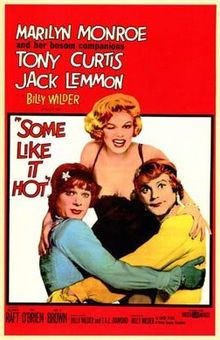 I know which one I'd sleep with

Although in Britain this “summer” we seem to like it mild and a bit damp. A members exclusive screening at the BFI seems like the perfect kick-off to a month of intense viewing on London’s Southbank. Part of the joy I guess, about seeing these old movies on the big screen is that I get to see films I have already seen on TV and in this case, seen on TV a long time ago. I get to re-assess my initial reaction as a teenager; now with a far greater volume of movies watched and in theory much more knowledge of moviemaking and movies.

As for the movie itself, it has “must watch” written all over it. The opening scenes echo the Warner Bros. gangster films of the ’30s and as the film unfolds, the gender stereotypes of ’50s America are gently subverted; anticipating the revolution that the ’60s would bring. This sounds quite serious, but the reality of Some like It Hot is the genius comedy brought to the screen. Jack Lemmon and Tony Curtis play Gerry and Joe / Daphne and Josephine (and Shell Oil Junior) , two broke musicians on the run from the mob after having witnessed a Valentine’s Day massacre in Chicago. The only way to escape is to join an all female jazz band who have a 3 week gig in Florida; meeting Marilyn Monroe‘s Sugar Kane (a ukulele player with a taste for liquor and sax players) along the way.

Will their true identities be revealed, will they escape from the mob? In the end this conceit becomes irrelevant – the sheer brilliance of the physical humour (men dressed as women, what’s not to find hilarious?) and the interaction between Sugar, Daphne and Josephine is all we really need. The lightness of touch by Billy Wilder is remarkable – the screenplay and direction of the 3 main protagonists seems so natural despite the obviously unreal scenario and I was stunned when I found out the movie pushes just over the 2 hour mark. Very much a case of “oh really, a 2 hour movie?” as opposed to “oh no, a 2 hour movie”.

If you’re looking for a true classic to cross off your list, with a great director, great actors and that is pure entertainment, then your search is over. Thoroughly recommended.