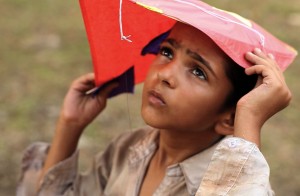 There can never be too many “children’s films”, especially ones which take you on a journey back to the days of innocence, where the mind was free from materialistic cravings, and all that mattered was to win a kite fight. Director Rajan Khosa‘s festival favourite “GATTU“, saw its London premiere yesterday at the London Indian Film Festival, and effortlessly swept the audience off its feet by its utter charm and simplistic story-telling.

At just 82 minutes, the story squeezes in multiple narratives. There’s the naughty protagonist in the centre – Gattu (Mohammad Samad), an orphaned boy who is unaware of his birthday, and is raised by Anees Bhai, whom he calls Chachu (Uncle). Between working at Anees Bhai’s junkyard, and doing daily chores, Gattu has one aim – to beat Kali, the unbeatable kite of Roorkee. To beat Kali, Gattu must find the tallest terrace in the town, which belongs to a school. Street smart Gattu devises a master plan, and even improvises on some. He sneaks into the school, posing as a student, but what he receives in the school, transforms him from being just a street urchin to a child full of hope. A simple lesson on gravity becomes the genesis of the “curious kid” in Gattu, and you can’t help but smile when he tries to educate his street mates with an apple.

Most importantly, GATTU touched me on a personal level, as it brought back a gush of nostalgic memories of my own school days – the images of the morning school assembly with children in uniforms, singing the school song in perfect cacophony, the punishments for not bringing text books, or “smuggling” comic books named “Wafadaar Jasoos” (the loyal detective), pranks played at clerks, and the innocent outburst of laughter at just the sight of a goat in the school compound. 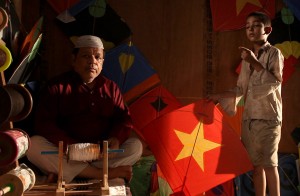 Rajan Khosa seamlessly weaves all of that within the narrative, and yet doesn’t shy away from the reality of the street kids who toil tirelessly. Gattu also reminds me a bit of Amole Gupte‘s excellent feature film – Stanley Ka Dabba.

With its brilliantly filmed kite fight sequences which are a mix of CGI and aerial shots, Khosa efficiently captures the essence of a sport mostly unknown to the western world. But you can’t help giving in to the excitement, and cheer for the underdog. And just when you start to think that the climax is done, a final reveal leaves you with an aftertaste of “khussee ke aansoo” (tears of joy). Sprinkled with a healthy dosage of humour, GATTU conveys the message that it sets out to without being didactic. And that in itself is an admirable feat. Do yourself a favour and watch this. It is probably the nearest equivalent of a cinematic hug.

Verdict: 3 Giant Hugs out of 5