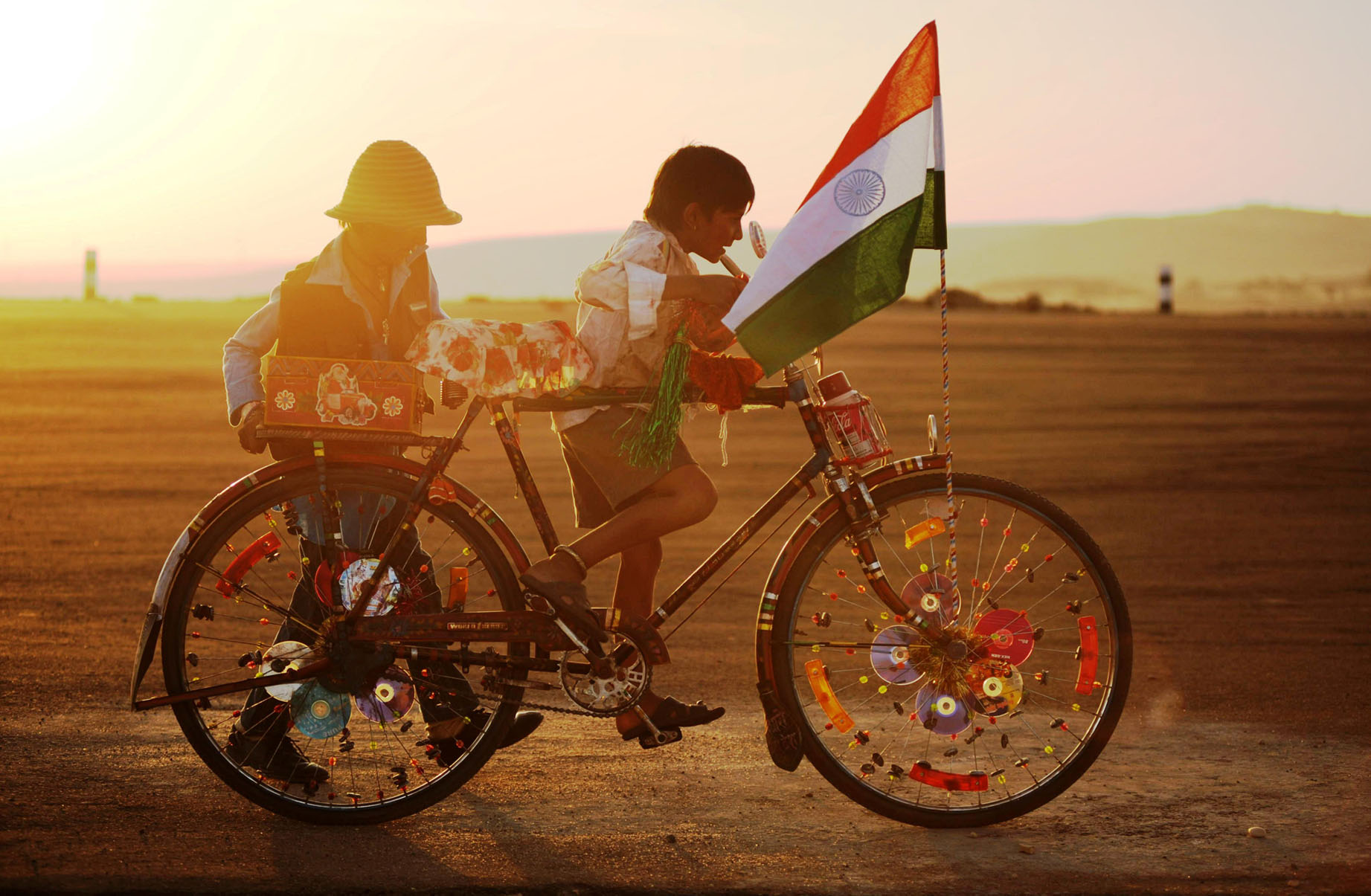 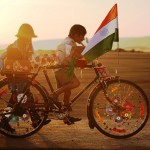 Our intrepid reporter Sujoy (@9e3K) continues his coverage at the London Indian Film Festival with a review of Dekh Indian Circus.

What do you expect from a movie, which has a poster showing a young boy, with the fluttering Indian tricolour on a bicycle decorated with CDs and bottle caps. Also, a golden brown sandy background with the sun shining beneath, and a fun red font for the title of the movie, all point towards a fun, charming and innocent “children’s film”, well suited to please Film Festivals and Sunday afternoon TV slots. Director Mangesh Hadawale‘s second feature “Dekh Indian Circus” is a crowd-pleaser no doubt, with its child actors providing enough smiles that remain with you throughout the movie. But by the time the lights come up, that pre-assumption of it being yet another “children’s film” goes straight out of the window, as we are left with characters, metaphors and pointed statistics which leave an indelible impression.

Dekh Indian Circus has a rather straightforward storyline depicting the struggle of a family of four, somewhere in the middle of rural Rajasthan. The father of the family, Jethu (Nawazzuddin Sidiqqui, Gangs of Wasseypur, Kahaani) is one of the many who struggle hard to earn the daily bread for their family. Being illiterate, member of the minor class, and mute leaves him  struggling to make ends meet. This makes his wife Kajro (Tannishta Chatterjee, Brick Lane), the head of the family, who despite being a rural woman, is progressive-minded and ambitious. She holds strong opinions on everything, be it morality or politicians, and is fiercely determined to secure proper education for her kids – the naughty Ghumroo (Virendra Singh Rathod, the boy in the poster), and his younger sister Panni (Suhani Oza). 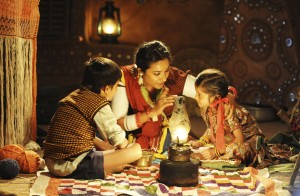 Set during a political campaign, it shows how rival candidates host huge rallies and promote electoral candidates – each promising to bring change, prosperity, as well as bribery in exchange for votes. This political “circus” is clearly taking advantage of the economically disadvantaged, who are manipulated, threatened and even beaten up. Meshed smartly within this political subtext, is the story of an innocent desire of the family to watch a traveling Circus. Little Panni is entranced by a flyer of the circus which has a stilt walker, she fondly calls “Lamboora Kaka” (Bamboo Man, literally translates to Very Tall Man). She begs her parents to make her only dream come true.

The story then takes us through the trials and tribulations of this circus visit. Hadawale smartly weaves various references to subtly convey the larger picture of how a nation, which is rising and shining as a leader of world economy, has poverty in its roots. India is the bigger “circus”, which has its “ringmasters” whipping the lions and making elephants dance, and then there are the “midget clowns” to be laughed at as well.

The performances by lead actors Nawazuddin Sidiqqui and Tannishta Chatterjee are top notch. Although Nawaz plays a mute, his angst, embarassment, and anguish comes alive with his expressive eyes. With Kahaani, and Gangs of Wasseypur, we have come to expect more and more out of this wonderful actor. And it was a bit disappointing to see him muted. But that is hardly a complaint. Tannishta Chatterjee might have been a bit “glammed” up for cinematic reasons, but brings authenticity in her role through mannerisms and genuine love to the role of Kajro – the ever sacrificing mother, and the relentless well spirited woman. And if young and naughty Ghumroo’s antics make you giggle and chuckle uncontrollably, little Panni’s sad face and precious tears are just heartbreaking.

Dekh Indian Circus is a competent film when it comes to depicting the story it intends to tell. It doesn’t take the route of portraying a third world environment via means of showcasing grinding poverty or sickening tragedy of rural India. It rather shows it in the light of ethnic beauty, of a communal presence of a society, which despite the dire circumstances they live in, derive happiness from the sounds of nature, the open landscapes and the simpler things in life. There is neither any didactic labeling when it opts to hint the political subtext. And enveloped with widescreen landscape images from Laxman Utekar, Wayne Sharpe’s effervescent score, and Shankar-Ehsaan-Loy and Prasoon Joshi handling the music and lyrics department, Dekh Indian Circus oozes of optimism and leaves you with a smile, even though your eyes might or might not be dry. It deserves the mainstream release it is getting in India.

Verdict: 3 Splashing Stars Out of 5