The Random Adventures of Brandon Generator 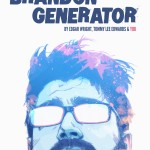 Each episode calls on fans to crowd source specific elements of the story, allowing you to help shape this interactive noir-inspired series. The story, has been developed exclusively in HTML5 to showcase the stunning visual experiences possible in modern web browsers and unique functionality of Internet Explorer; with Pinning used to provide access to exclusive extras and Jump Lists providing direct links to apps and crowd-sourcing options.

This is a fantastic concept; it has a brilliant visual style, excellently told stories and great music. Episode 2 already sees Brandon battle one of his own creations – a monster made entirely from Java coffee, our hero’s very own source of energy.

To watch and take part, click here  and find out how you can influence the unravelling world of our caffeine-fuelled anti-hero. To optimise your experience download IE9 (it still works via Chrome tbh). To find out more about the project follow Internet Explorer on Facebook.com/InternetExplorerUK and Twitter.com/IE_UK and Brandon Generator on Facebook.com/BrandonGenerator and Twitter.com/Brandon_gen.

You can even upload a photo of yourself to win the chance to be illustrated by Tommy Lee Edwards and penned into later episodes!