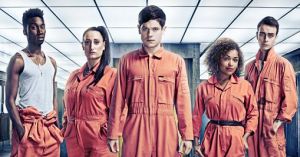 One of the very best British things around right now, Channel 4‘s Misfits makes a welcome return to E4.  Asim and Martin were fortunate enough to see a preview screening of the first episode from season 3, at the British Film Institute on London’s Southbank.

Not only a preview screening, but an intro from the producer, plus Q&A with creator Howard Overman and cast members AND a sneak peak trailer for episode 2.  Joining Howard Overman on stage were Lauren Socha (Kelly ), Iwan Rheon (Simon), Nathan Stewart-Jarret & Robert Sheehan replacement, Joseph Gilgun (Rudy).  Ahead of the Q&A the audience was told “whatever you ask, just make sure it’s not about what superpower we’d like to have if we could choose one!”  The cast must get this question so often it’s like an IV drip.

Season 3 opens with the gang almost all back together and with new powers.  Nathan, we are told is “in Las Vegas” and we are left to really get to know the replacement, Rudy, played absolutely perfectly, by Joseph Gilgun.  Sadly Robert, Rudy’s character is fantastic and we’re just not going to miss Nathan at all!

Without divulging too much, the show’s a cracker – slightly-comical death and sexual return to our screens – and by the time we’ve been introduced to Rudy’s new character the gang are back doing community service in the safe hands of the same probabtion officer from the previous episodes.

Set your Tivo for 10pm Sundays on E4 and find out who the real Heroes are.