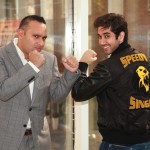 Upodcast attended a Q&A with the cast of Speedy Singhs/ BreakAway in London who were in town to promote their Ice Hockey Underdog crossover film releasing in the UK on Friday 30th September 2011. International comedy sensation, Russell Peters, and rising star of cinema, Vinay Virmani, joined fellow cast and crew members including much adored comedian/actor Gurpreet “Ghuggi” Singh and co-producer Ajay Virmani as they addressed the audience and conducted a Q&A session with media in attendance.

We had a chance to pose some of our questions in typical Upodcast fashion and tried to get some clarification from Russel Peters about the statements he recently made about Bollywood.

A lot has been said in the media and even more so has been pulled out of context but you can listen to the entire press conference here and make up your own mind.

From the Press Release:
Directed by Hollywood filmmaker Robert Lieberman (‘D3: The Mighty Ducks‘, ‘Table for Five’) and produced by First Take Entertainment and Bollywood superstar Akshay Kumar’s Hari Om Entertainment, ‘Speedy Singhs’ is a gripping, cross-cultural hockey drama set in the Indo-Canadian community of suburban Toronto, Canada. Other stars in the film include Hollywood heartthrob, Rob Lowe; the demure Camilla Belle (‘The Lost World: Jurassic Park‘, ‘10,000 BC‘); and veteran of Indian cinema Anupam Kher (‘Bend it like Beckham’). A galaxy of other exciting cameos are provided by the likes of recording artist and actor Aubrey “Drake” Graham and Grammy Award winning rapper Chris “Ludacris” Bridges. Ludacris added his vocals to the cross-urban music track of the year, “Shera Di Kaum”, the promotional song for ‘Speedy Singhs’, where he also features in the video.