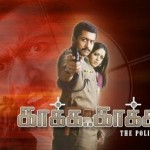 So this 2003 cop drama starring Surya, Jyotika and directed by Gautham Menon was available on Youtube (probably temporarily so check it out!) on some extremely shady channel but with some funtastic “paagal” subtitles. Having lamented the fact that there is no proper distribution system set up for South Indian movies, making it impossible to be completely up to date with new releases. I take any chance I get to catch up with this flamboyant film genre. Releasing in September in a Hindi remake directed by Nishikanth Kamat starring John Abraham and Genelia. We analyzed the trailer in an earlier post, but now check out our review of the original after the jump!

I used to avoid Tamil movies because of the usual Hindi Film Bias. They are low in production value, overtly melodramatic, have been stuck in hackneyed plots and styles of film making that haven’t evolved since the 80’s and oh yeah there are a hell of a lot of rapes used as plot devices (no joke).  But as the Michael Jackson song goes, I have tried to make a change, partly due to the many friends that have been recommending me to give South Indian movies another chance.

That’s why this cop drama was such an eye opener. It was sober in its approach and didn’t have a screaming style of film making.  Starting with a bloodied and shot up Inspector Anbuchelvan (Surya) clawing his way onto the riverbanks and thinking of Maya, the girl he needs to save, in what might be his final breaths.

We voice-over/flashback to when Anbuchelvan and a few of his colleagues were recruited into a special crime branch unit to tackle crime in a Dirty Harry manner. (Shoot first and then maybe ask questions after) They manage to eliminate most of the crime bosses in the city but due to their effectiveness (or more likely extreme approach to law enforcement) the unit is disbanded and Anbuchelvan is reassigned to the police control room. (Which doesn’t seem to stop him randomly threatens and shoots criminals in the street, probably because he’s a total bad ass) 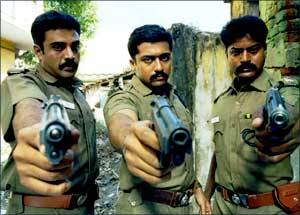 He meets Maya (Jyothika), a school teacher, during his break from police fascism. Through a series of mishaps, conundrums and misunderstandings they slowly fall in love. When Pandya, a relative of one of the surviving crime lords, who’s quite a nutter imports his joker style insane crime practices from Mumbai . Well ladies and gents, it is on!

The day after Maya and Anbuchelvan’s wedding night in Pondicherry, the thugs break in, torture and shoot Anbuchelvan and kidnap Maya. Rape threats have been flying around since the first 20 minutes of Kaakha Kaakha ( and this being a Southie flick) so you know where this is going.

The performance by Surya and the direction of Gautham Menon are really what elevate Kaakha Kaakha a notch above the regular police dramas.  I have now seen quite a few performances by Surya and he has impressed me every time, he has a quite threat to him and a cool demeanor but matched with a tough physical presence.  There isn’t a moment you don’t believe in him as the tough talking, no nonsense Inspector and his heroism even makes you glance over his pretty reprehensible policing tactics he uses. Gautham Menon’s decides to take a gritty approach to making this movie and although it’s been a few years since this movie came out, most of it still works, and his style reminded me of Madhur Bhandarkar‘s Aan, Men At Work, a movie that was completely sidelined by the vastly superior Khakhee which came out the same year. (Not to be confused with the 90’s Charlie Sheen- Emilio Estevez starrer with garbage man shenanigans).
But where Aan was just a drudging affair, Kaakha Kaakha manages to balance entertainment with realism. It’s good, has aged pretty well and it’s free on YouTube, so go check it out!

What can be improved in the forthcoming Hindi Remake Force?

All the other characters and performances

The voice over narration

Since Robert Mckee’s book on screenwriting, the voice over has been dubbed as a lazy film making device and although not as prevalent in Indian films, it does get grating after a while in Kaakha Kaakha too and just the thought of John Abraham’s monotone delivery throughout the movie is already making me cringe my future trip to the cinema when it releases.

Is terribly shot. It’s all in slow motion and shot in blue in a blue filer for no apparent reason. It just plainly sucks and doesn’t do Surya’s character arc and performance any justice. We then end with another voice over by some other dude.

Honestly, I skipped over most of these as the subtitles were really horrible and I enjoy understanding what people are singing about. But they have roped in Harris Jayaraj, a South Indian music composer who seems to have a pretty good track record so I’m quite hopeful we’ll have some good songs in a year which has been pretty abysmal in terms of music.

What I worry about?

Oh dear Lord, John Abraham….I don’t know how he can match the intensity that Surya bring to his performance. Looking at the trailer he seems to have focused on his getting ripped and finding the right beanie for the role and in the entirety of Khaakha Kaakha there is no need for a six-pack or fashionable headgear.  In the Hindi trailer we see quite a few bare chested scenes of John, running around, taking showers and screaming like Wolverine but unless they have changed quite a bit from the original story, there is no need for it. And the one line you do see him deliver lacks in punch that South Indian movies are known for. But Abraham has never impressed me (no, not even in New York or Dostana) and in a career close to a decade now, he should have at least come close a few times. I hope Force becomes the breakthrough performance that Karam (2005) wasn’t. We wouldn’t want that six pack go to waste now would we?

And Check out Kaakha Kaakha on youtube by clicking here! no idea how long this link will be live.

Thanks for my friend Menonworld for pointing it out!

Have you seen Kaakha Kaakha? And do you think this will be John Abraham’s break out performance? Let us know in the comment section below!