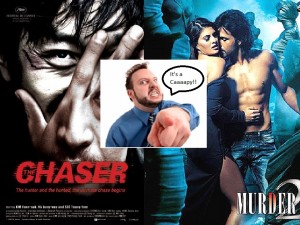 With the release of Murder 2 and Singham, message boards and twitter timelines are rife with calling out movie makers as lazy thiefs and intellectual hacks. Bollywood has always had a rich tradition of playing fast in loose with it’s ‘inpirations’ so Upodcast decided to take on this subject head on with our unique view of the world of Hindi Film and music industry and accompanied by an esteemed panel of sharpshooter bloggers, we give you the discussion to end all discussions. Check out our take on Remakes, Adaptations and Straight Lifts in Bollywood!

This week we are joined by FilmiGirl, The Bollywood Fan and Rumi from the Roti Kapada Aur Rum Blog.  You can follow all of them on twitter! They are tons of fun.

A small correction, We did call the Episode 32 in our excitement but you’ll have to wait a little for that one and there might be some small background noises for the first couple of minutes that are resolved really quickly, apologies for that.

Here is one of the Pritam Music inspirations video’s we spoke about.

And here is a video that shows that even the greatest directors regularly get inspired!

Everything Is A Remix: KILL BILL from robgwilson.com on Vimeo.

You can follow the writings of our guest on their blogs!

Let us know what you though of the podcast in the comment section below! Or subscribe to us in Itunes!