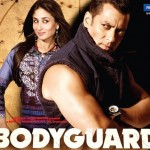 Trailer Analysis: Our good friend Honey who always has all the latest Bollywood the scoops just posted the trailer and posters for Salman Khan‘s next outing The Bodyguard (check out her site for more pictures and goodies!). Written and directed by the director of the original South Indian movie, Siddique, it co-stars Kareena Kapoor and is produced by Atul and Alvira Agnihotri (brother in law and sister of the star actor). So check out the trailer below and some of our thoughts after the jump!

Clearly, Bodyguard wants to ride the Salman Khan train all the way to money central and  thus gives us a mish mash of every one of his recent hit films in scientifically precisely measured doses. We get the punchy dialogues and screwdriver drop kicks from Wanted, the multitude of designer shades and warehouse fighting  from Dabanng (I even see the same thug from the Jalwa ringtone joke) and the second half of the trailer seems to skip over to Ready with pastel bright polo shirts and jokes that are slightly funnier and we have the trailer ending with those god damn tapori whistles from Dhinka Chika.

Now I don’t know how much of these ingredients were in the original South Indian version and how much has been lazily copied over as it’s a formula that the audiences are just lapping up.  But adding Kareena Kapoor (does she ever not get introduced in a trailer or movie where her hair isn’t flopping around like an ad for Timotei?) does give the movie something to look forward to although the pairing has never really been accepted by audiences although in our mind there was much to like about Kyun Ki (if only they changed the climax…). And who can resist those Geet from Jab We Met – teary eyes?

But knowing the Atul Agnihotri‘s track record I am sure they can’t afford to take any risk and just want make the safest bets possible. I do find it hilarious that where both in Dabanng and Ready, there was some level of subversion to the shirtless Salman scene. Here the makers have just put it in the second shot of the trailer.

The whole trailer screams: You like Salman doing these types of scenes right? So here is some more!

I do hope audiences don’t get bored of seeing the same tropes over and over again, although I imagine Bodyguard might just force them to reach saturation point quicker.

In any case, we’re still fully on board and have our Salman Khan flag flying up high.

Bodyguard is booked for an Eid release.

Let us know what you thought of the trailer in the comment section below.