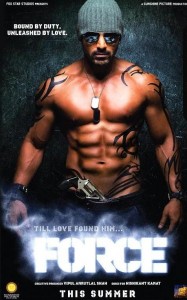 The Trailer for John Abraham cop drama Force has just been
released. Like Wanted last year and Singham releasing very soon, this is a remake
of a South Indian movie (Kaakha Kaakha). A couple of years before either of
these movies, Ghajini was remade by Amir Khan starting the trend of remaking
South Indian movies to a Hindi Film audiences and to mythical box office success.
Both Ghajini and Khakha Khakha originally starred south superstar Surya, a very
accomplished performer from everything I have seen of his, which admittedly isn’t
much due to the unavailability of South Indian DVD’s with decent English
subtitles (sort it out Tollywood if you want to compete with your Northern
brethren!) Now the question is why just importing Surya to Bollywood? He
managed a pretty menacing performance in Ram Gopal Varma‘s Rakht Charitra – 2 even
overshadowing Vivek Oberoi in some sequences.

If there is a language barrier (although I find the accent
charming) it’s nothing that a language coach can’t solve and it’s certainly
better than spending months with personal trainers and nutritionist to reach
the impressive physiques that seem to be a requirement to take on these role in
Bollywood.

Here’s the trailer: *Update this is a new trailer*

John Abraham’s dedication can’t be put into question
(especially as he had gained weight for his previous role making the Photoshop
laden poster above even more impressive) he doesn’t have a  huge fan following to speak of (none that I
can imagine lining up for an action movie) and I would argue Surya would be
able to bring in more people just from the South. I also wonder about John’s ability
to pull off a macho role like this…he just misses that masculine growl in the
few dialogues in the trailer.

Also I’m pretty sure he lotions up with Aloe Vera as soon as
he steps out of that pensive shower and books in a nail appointment.

Force releases in rumored for a releasing on September 16,
2011

Do you think this will be John Abraham’s breakout role? Let us
know in the comment Section below