Is this the original version of Character Dheela? 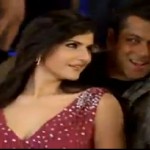 During the promotional run of the blockbuster Ready, there were  rumours circulating about introductory song Character Dheela being reshot as Salman Khan and the production company Tips weren’t really happy with the grandeur of the original version. The rumours took the usual route of first being multiplied and enlarged (allegedly director Anees Bazmee was annoyed of being side tracked and then close to walking off, then Farah Khan was being approached) , then denied and as soon as the movie became a hit, completely swept under the rug.

Now there is a remix version out of the song on the Ready Facebook page that suspiciously looks like the the original version that was shot? If you want to have a look at what Character Dheela might have looked like. have a sneak peak here

The picturization looks awful and looks more like No Entry which came out years ago. Above all Zarine Khan must be thanking her stars that the reshoot decision was made because after the movie’s producers, she is probably the one that benefitted the most in terms of buzz, as her appearance was really appreciated (as it was by us in our original review which you can read here)

Let us know what you think of Character Dheela in our comment section below!

2 thoughts on “Is this the original version of Character Dheela?”