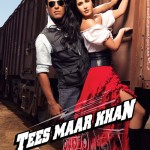 Farah Khan’s comic caper has a lot riding on it. It’s Farah breaking out on her own, free from collaborations that were safe bets from within a comfort zone. In some way it’s a comeback for Akshay Kumar whose had a horrible year of releases. And it’s also Katrina Kaif strongest claim for the top Bollywood heroine slot. (if she doesnâ€™t already own it?)

A lot of question surround this movie but you forget about all of that within minutes when Tees Maar Khan theme song kicks in.

I’ll try my best not to spoil too much of the movie as I was fortunate enough to catch an early preview in London; but honestly speaking I could only spoil some of the comedic beats,not much of the plot.

It’s a pretty straight forward masala caper and most of the set up is in the trailers.

Tees Maar Khan urf Tabrez Mirza Khan ,the biggest con artist in the world, is hired to rob a train carrying an immense treasure for a set of conjoint twin â€œvillainsâ€. He also is a shameless plugger of his own name. There was maybe one too many reference to the title of the movie to my taste but all that is not important for what we get is easily one of the funniest and most entertaining entertainers of the year.

It’s what Housefulll wishes it was, what Action Replayy could never accomplish and what Golmaal lies in bed at night crying it could be one day.

First, I would suggest that if you have a chance, go and watch this movie on the big screen. Partly because it’s the kind of movie that is elevated with a participating audience and partly because it needs the big canvas so you can soak up all the gorgeousness in every shot.

I have a pretty good media set up at home but in no way could I understand the awesomeness of Sheila Ki Jawaani until I saw it today.

There were many discussions the previous weeks about which was the best item number of the year: Munni Badnaam Hui from Dabangg or Sheila Ki Jawaani.I am still not sure I have an answer for that question but what I can tell you is that there were moments in Sheila ki Jawaani that Katrina Kaif took the entire audience’s breath away.

It is EPIC and if I could, I would rewind it and watch it again. You might not be able to do that in a cinema (unless you’re Raja Babu) but what you do get in the theatre experience is the full force of Vishal- Shekar‘s â€œsaaandâ€ blaring through the speakers and every minute detail of Katrina’ s performance elevating the song to a whole new level.

In my opinion Katrina delivers the strongest female comedic performance since Kareena Kapoor in Jab We Met. She is hilarious in every scene as Anya Khan the wannabe Starlet/Item girl and I really hope people stop asking her to prove herself over and over again. I think she has been doing that in her recent roles and this is probably one of her bests.

When reviewing our best Bollywood soundtracks of 2010 (click here) we thought that the Tees Maar Khan OST was maybe not the greatest (I am still not convinced of the Sonu Nigam’s Chipmunk voices) but it could only be fully judged when seeing it picturized. And lo and behold I was humming the songs exiting the theatre and want to get my hands on the soundtrack as soon as I can.

Although Salman Khan’s cameo in Wallah Re Wallah is featured in the promos, it still manages to send a bolt of excitement through your spine.

The first half of the movie just breezes by and the second half has a bit of a slower start but manages to put in a lot more heart in the movie.

So now on to the Khiladi. See I’ve always been fond of Akshay Kumar (especially his work ethic and just plain sincerity) but somewhere his lovable loud mouthed buffoon shtick and those indistinguishable Priyadarshan comedies just turned me away from him.

A movie that I unashamedly loved back in the day was â€œMr. and Mrs. Khiladiâ€ ,probably not the most discerning of choices, I admit but Akshay was amazing in it. That’s the kind of Akshay we get here. he is again ahead of the world, a real hero character kids would want to emulate (those fluorescent Jersey Shore Shirts can be omitted) . Someone who is witty, funny and confident. I donâ€™t know if he ad-libs some of his lines in that throw away manner but it makes me crack up everytime and actually believe in Akshay as a leading man again.

Unfortunately for my non-hindi speakers the subtitles were not able to catch every joke thrown in but there are so many if you miss one you’ll surely catch the next one.

There are even â€œInception- likeâ€ levels of joke-within-a-joke which film geeks can play filmi-bingo with. I would suggest inventing a drinking game around it, someone catches a reference and everyone drinks. Even I jumped with joy seeing Anil Kapoor’s most iconic dance and the whole Master India sequence. (Boney for reals, can we get that Mr.India sequel already??)

But you can also just enjoy the movie just as a fun masala caper with great dances and and performances from the lead as well as the supporting cast (woohoo Avtaar Gill!!) and we even get the final sequence where the whole team apears.

Akshay Khanna is hilarious as the oscar obsessed Bollywood superstar, some will claim it’s inspired by Amir or Shahrukh but I donâ€™t see it really or at least nothing to create news stories about but I’m sure that won’ stop people.

There are certain moment that I did feel the ghost of Shahrukh Khan, who was rumoured as the main lead, loom over Tees Maar Khan. In some of Akshay’s hero poses, comedic repartÃ©s and even some of the choreography, you can can almost imagine what Shahrukh would have done with it. Even a few of the sets and dÃ©cors were eerily similar to Om Shanti Om. But although fun to speculate that’s just context with no real importance to the film.

All in all I think this movie is a great move for Farah, Shrish Kunder and her production company in developing her Manmohan desai style even further. I am truly looking forward to her next paisa vasool flick but until then: go watch Tees Maar Khan on the big screen NOW!