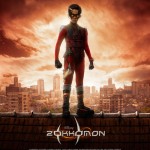 The superhero bug has bitten the entire world and the Indian film industry is no different.
Except for the ridiculous Govinda- Kimi KatkarÂ  Indian Superman scene on YouTube, the first real superhero that I can remember was Amitabh Bachan in the awesome Shahenshah. I remember there was a 3 week waiting period in our Karachi video rental store.
But I’ll let that memory back in the campy 80’s where it belongs.
We had the Hritik Roshan starrer Krrish which really wetted our appetite for a proper Bollywood superhero.(Good effort but doesn’t have originality or repeat value unless you actually think you can be Krrish when you grew up)
Shahrukh Khan, the supreme superstar of Bollywood (aka King Khan) is taking a swing on the genre with Ra.one a cutting edge mix up hi-tech and skin tight Lycra insanity. My worry is that Bollywood is making the first type of superhero moviesÂ  as we saw back in the 70’s -80’s with a supreme good guy as a heroe with no human flaws whilst the audience has now grown up, moved on and prefers a moreÂ  darker approach( more real?) eg The Dark Knight, The Watchmen and the forthcoming Kick Ass.

But in the meantime Disney have released the first images and trailer to Zokkomon, their foray into live action Bollywood production.
Their previous animated release was Roadside Romeo which to me it felt like an incoherent mish mash of deja-vu sequences with strained voice work of super couple said ali khan and Kareena kapoor. It was clear that the actors were not yet comfortable with the animated medium.

But now we have Zokkomon starring the revelation of Taare Zameen Par(masterpiece by Amir Khan about a child coming to terms with dyslexia- a strong recommendation from my end).
The costume design kinda reminds me of Red Mist in the kickass posters but to me that’s a minor detail and still I’m excited!

Red Mist-Kick Ass (I’m not crazy that i see a similarity right?)

let us know what you thought of the trailer in our comments section!