FilmBlog: Review My Name Is Khan 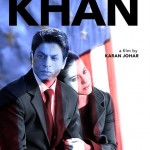 My Name is Khan… and I’m not a terrorist.

A line spoken many times in this movie by Indian Superstar Shahrukh Khan, playing a good hearted Muslim man suffering from Asperger’s Syndrome, resonated with me in a very strong way. It’s a feeling that I have tried to utter many times but this movie manages to do so very simply.

I have been racking my brains on how to approach this review.

I could talk about it from a Muslim point of view, living in a country that is not my own and the struggles many of my similarly skin-toned brothers and sisters have to battle. Unfortunately Iâ€™m not that good of a Muslim so my arguments could be completely invalid and I donâ€™t want to proclaim to be a victim when my own parents went through a lot worse in their days. I’m sureÂ  Chris Rock has enough clips on Youtube to illustrate my point.

I could write as a critic of Hindi Cinema tearing down any inconsistency I was able to pick up on, be it the slowing of pace post-intermission, the horrible broad strokes that every non-Indian character is painted with or the lack of a riveting climax.

But whenever in doubt, I take a scattershot approach, try everything at once and fail horribly in the public eye. Yes, that is how I (Jelly-)rollz.

The route I choose to take is the one this movie tries to takeâ€¦ the human route, taking away all other details to bring things back to a core message, one that our protagonist is taught by his mother played wonderfully by yesteryear ( I do hate that word) actress Zareena Wahab.

There are good people in the world that do good deeds, and evil people that do evil ones. There is no further difference, be it religion, race, creed or culture.

I loved My Name is Khan for its message and intentions. Itâ€™s so good hearted it can be forgiven for its overt sentimentality, dramatic music and dialogue cueâ€™s. This story of Rizwan Khan who has trouble connecting with the subtleties of day to day life (some may argue that this movie has trouble with cinematic subtleties but you did sign up to watch an Indian movie). Although he suffers from Aspergers he is a very bright and ingenious thinker, comparisons with Rain Man donâ€™t hold up as he isnâ€™t playing an idiot savant (plus his brother never kissed Mia Farrow). Forrest Gump would be a more apt comparison but only for the second half of the movie.

He takes his simple message to San Francisco moving in with his brother and Sister in Law. Where he meets and falls in love with Hairstylist/Single mother Mandira (played by the always delightful Kajol). The repercussions of 9/11 create a rift in their love story causing him to undertake the mission of going on a road trip to meet the president of the United States to tell him that one simple messageâ€¦ My name is Khan and I am not a terrorist. On his road his good heartedness affects a wave of people along the way leaving the audience a blubbering mess.

Shahrukh Khan is always entertaining; his charm (as recently seen on Friday Night with Jonathan Ross) carries this picture to an emotional but underwhelming conclusion. It’s the little moment of charm that make you fall in love with Rizwan Khan and you end up completely buying into his quest. You feel for his character, the frustration he feels of not being to express his emotions and the love he feels for Mandira.

Overall the performances are great by most Indian actors. I could watch Kajol read the news and I would be glued to my screen, both Jimmy Shergill (playing the role of Rizwanâ€™s frustrated younger brother, this would be a character you would have in any other movie but Jimmy carries it off because he is that damn good) and Sonia Jehan (almost makes me want to see Taj Mahal, her first big screen appearanceâ€¦ almost) are great in their small roles and I would have loved to see more of their struggles. Mostly the focus lies on Shahrukh character and his wonderfully understated approach on a subject matter that might not be appealing from the get go.

Cinematography by Ravi Chandran is beautiful, costumes, art direction and music are of vey high quality but I wonâ€™t be putting this album on repeat, itâ€™s just not that kind of album.(special mention to Sajda by Rahat Fateh Ali Khan, hear me rave about him in episode 5 of UPODCAST)

The few points that work less for me are:

Listening to Kjoâ€™s interviews it does seem he is hands on with most actors except Shahrukh Khan( as Khan doesnâ€™t want to listen to Karan) so I think the failure does lie with his character design. Another example of this is Kajolâ€™s motivation in the second half of sending Rizwan off on his quest, which seems too abrupt and contradictory to me even if the tragedy she goes through is very real.

The stand out scenes for me where the entire romantic track between Rizwan and Mandira from their meeting until the interval point. There chemistry is still the strongest romantic pairing in current Indian cinema.Â  The segments of Rizwan growing up in India and the confrontation he has with some of the more violent Muslims in the US mosque are riveting.

Itâ€™s great to see a moderate voice take on some of the people that are usually the more vocal (and maybe â€œinsaneâ€) part of the Muslim community. And the words he says are onspoken by many of us have had but have not been shown this way on screen.

What works less is the CGI both in the Georgia flood scenes as in the key moment Mandira and Rizwan fall in love. It made me think of a discussion going on about Titanic and how after AVATAR James Cameron claimed he would do the entire movie in CGI.Even the sunset on that famous kiss scene between Leo and Kate would be CGI. I think if he was able to do so we would have lost out a lot of the power and exactly this power is what’s missing in the scene where Mandira decides to marry Rizwan and bring him into her and her teenage son’s life.

The ending doesn’t work for me because of the casting. The portrait of the president is very jarring. And altough the president of the US is never named specifically, the movie just looses steam.

But I would urge you to seek out this movie as since it’s been distibuted by Fox it does have a wide release and it’ s an unbelievably fresh approach to issues that really do affect all of is.

My Name is Burney, and I freakin’ loved this movie!

If you manage to catch My Name is Khan, let us know what you thought of it on feedback@upodcasting.com

6 thoughts on “FilmBlog: Review My Name Is Khan”