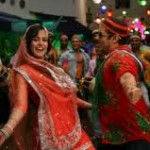 Farah Khan’s Akshay Kumar– Katrina Kaif starrer, Tees Maar Khan is closing in for a Christmas release and has quickly become the talk of the town altough maybe not for all the right reasons. To counter or fuel the PR machine the third promo featuring Salman Khan, basking in his post Dabanng glory,  has just released. Check it out this mast qawalli number and our thoughts on some of the controversies surrounding Tees Maar Khan’s release after the jump!Read More »Wallah Re Wallah Sheila ki Controversy: Thoughts on Tees Maar Khan