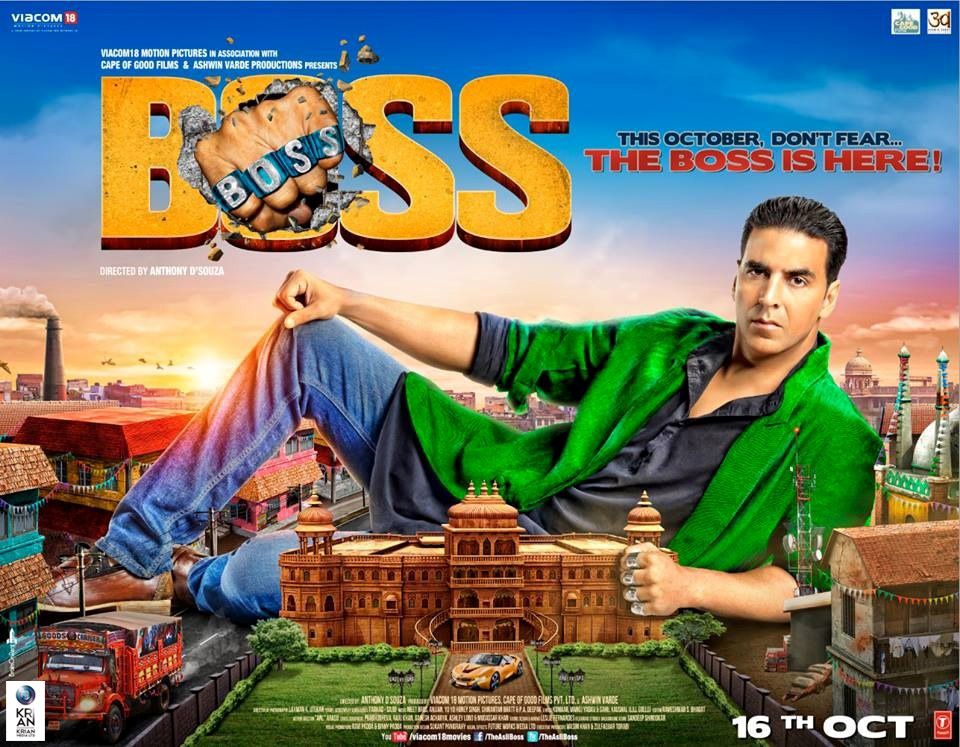 There is always a slight reluctance on my part to post these PR- Media interviews with actors. On the one hand it keeps feeding the PR bullshit machinery which none of us really want, but having done enough interviews I also realize that most of the actors are so coached anyway that it’s hard to get any honest moments from them anyway.

So here is a media interview done with Khiladi Akshay Kumar for his forthcoming Boss, which I am honestly looking forward to.

(also I am loving the Party All Night Track)

Q: How would you define your character in BOSS? And what made you sign this movie?

A: ‘BOSS’ is a very colourful Haryanvi character and that’s exactly what appealed to me.

He is a larger-than-life figure from Haryana with his own distinct style and attitude.

That forms the Masti [fun] part in the film. But there are some things he will neither

forgive nor forget, highlighted in reference to a particular situation involving the most

dearest people in his life. You don’t mess with BOSS and that message is very clear.

When Ashwin (Varde) and Tony (D’Souza) came to me with the film’s concept, I loved

it. BOSS is about fun, high octane action sequences and stunts and a good sprinkling

of romance (not for me though!).

Q: How is BOSS different from other action movies?

A: It’s different in many ways. The main reason is that we are offering the audience a different type of action movie that has a unique panache and style. Every action sequence is designed differently. BOSS is an intense film with a strong action backdrop, needed to drive a powerful story forward.

Q: You shot some major parts for BOSS in Delhi and Bangkok. How was it returning to these places that played such an important role in your life’s journey?

A: I grew up in Delhi and worked as a chef and learnt Martial Arts in Bangkok, so both places mean a lot to me. It was emotional returning to Chandni Chowk in Delhi especially though as we were barely 200 meters away from my old house. Due to the excitement around the film I was unable to go and visit my old house during the day, but managed to drive past in the early morning recollecting my happy childhood memories.

When I was shooting in Thailand, where I studied Martial Arts on the streets of Bangkok, I was also accompanied by my family. I took my son (Aarav) and niece to the kitchen I used to work, eat, sleep and train at in Bangkok when I was 17. Just seeing the small room where I used to rest my head after a tiring day of street fighting for extra money brought back so many memories. I had to fight back the tears in front of my son when I stood in the doorway of the kitchen I once worked so hard in, wondering how different my life is now. One day I was frying noodles, the next I was frying my brains over learning lines for my first film. Never say it isn’t possible. I’m proof that there is nothing more powerful than fate itself, even when the world thinks you’re just a plain boy wiping tables and cleaning dishes.

Q: It took a little while before the industry and the audiences started taking you seriously as a star. How would you describe your journey?

A: My journey has been both difficult and fantastic at the same time but I guess that’s part of life. It may have taken time for people to accept that I was more than just a struggling actor. I was also very determined to succeed and you can never achieve success without working towards it and adopting a diligent, positive and honest approach to this. I was Akshay Kumar, born with nothing but good parents and God’s hand on my shoulder!

Q: You worked with Ronit Roy way back in Sainik. How was your experience and how far has he changed now in BOSS?

A: When Ronit and I worked in Sainik, we were both very young. There was a lot of affection and respect for each other even then. Working with him again in BOSS after so many years was a wonderful experience. He is a fantastic actor and BOSS will showcase him in a different way. He has worked very hard on his role in BOSS and the audience will be nicely surprised by his performance.

Q: You are perhaps the first actor to ever play a Haryanvi character. What are your thoughts on this, was it a fun role to play?

A: Every character comes with its own identity. I was excited about playing a Haryanvi character in BOSS because that’s something I haven’t done before. And I always like to re-invent myself and present to fans a side of my persona they may not have experienced before. The character fitted so well with the story. It was a great experience.

Q: How was the experience of doing action scenes at 47° Celsius? Is BOSS your best action film according to you?

A: I would say it was my toughest shooting experience when we shot in 47 degrees. But full marks to the entire unit for bearing it and giving the best results. I would like to believe that in every film, I try to give my best shot. As far as action is concerned, I like to set new records every time. BOSS features a variety of high octane action sequences – the best part is that some of the scenes were very new to me and I haven’t performed these in any other films before.

Q: Which is your favourite song from BOSS?

A: Please don’t ask me to pick out just one favourite track because I simply love them all. I genuinely believe that the BOSS soundtrack is a complete package. Each song has been shot in a unique way. But yes, the Pitaah song is somehow closer to my heart because it’s about a father-son relationship. Har Kisi Ko’ is another classic treat for everyone who grew up in the eighties.