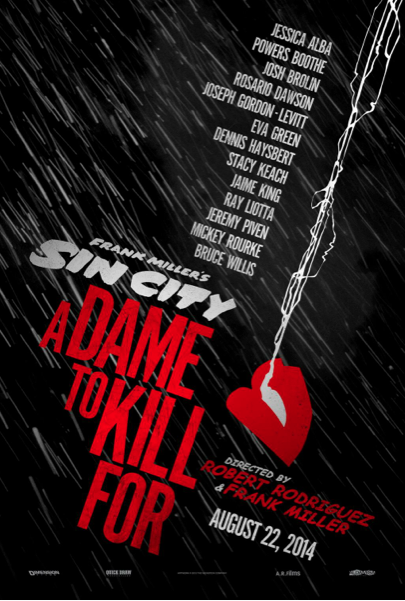 Sin City: A Dame To Kill For Trailer

It’s been 9 years since the last Sin City and the sequel has pretty much been talked about since that day. Co-Directors Robert Rodriguez and Frank Miller bring together an amazing cast with some returning faces.

Here is the poster and trailer:

“Sin City” graphic novels back to the screen in SIN CITY: A DAME TO KILL FOR. Weaving together two of Miller’s classic stories with new tales, the town’s most hard boiled citizens cross paths with some of its more reviled inhabitants”

The first movie was groundbreaking but will it be able to do the same after almost a decade? The trailer seems to be more of the same visual style and noir elements, so let’s see! To anyone who has listened to our show, you must have figured out that it takes a lot for a movie not to be liked by me.( I gave Kevin Costner‘s Postman a pass in our Bonus episode- Marty still hasn’t forgiven me)

I just love movies! The more ridiculous the premise, the more I like them. To me a movie needs to be entertaining and the paceÂ has to beÂ be justified by the narrative. Or it has to be something I have never felt or seen before. And if all else fails, I just want a corny B movie that I can switch my brain off to!

Armored is a dissapointment as it fails on all these points. This movie stars a huge cast Matt Dillon, Laurence Fishburne, Jean Reno, Skeet Ulrich and Heroes’ Milo Ventimiglia. It’s directed by Nimrod Antal, who if you dont remember him by his name alone is also the guy who will be directing the new ‘Predators’ movie produced by Robert Rodriguez( Click here for more info). The story is of a security transport crew that decides to rob their own delivery of 42$ M in cash. Altough Matt Dillon keeps pointing out to his compradres that this is indeed that mythical FULL proof plan all small time crooks dream of, things do not go as planned.

Man, I feel bad for the cast. Any one of these guys could have guaranteed at least a decent opening if we were in a dfifferent era, some of these guys were even hot properties for a while. Laurence Fishburn (or as he is known on my Pakistani VHSÂ bootleg of The Matrix- Laurence Fishbird) is relegated to being a gun toting trigger happy fool whose entire role consists ofÂ pretty much making grunt noises like the torture scene in the aforementioned sci fi classic. (a cross between a dying camel’s last breath and the noise you make when you haven’t cut your Fugu fish according to instructions).

Matt Dillon acts very creepy but is unable to convey any real threat, he soundsÂ like one college boys in the Bro Rape Video. Skeet Ulrich and Milo are relegated to side roles (sacrifical lamb and dying vistim- I won’t spoil who is who but you can totally get why Milo played Stallone’sÂ  son in Rocky Balboa, they both do a great droopy face), they are probably reminiscing of their Scream and Heroes heydays.

The only thing that does work is Nimrod Antal, I think he has a great eye for bare bones actions and I am looking forward to Predators. Too bad the whole movie is locked in the armored truck of it’s own B-grade design.( see what I did there?)

It’s completely understandable this movie came and went without anyone notcing. Not enough action to make you forget the plotholes and too many plot holes to make you appreciate the star cast. But a great showreel for the Director.

Let us know what you thought of Armored on feedback@upodcasting.com