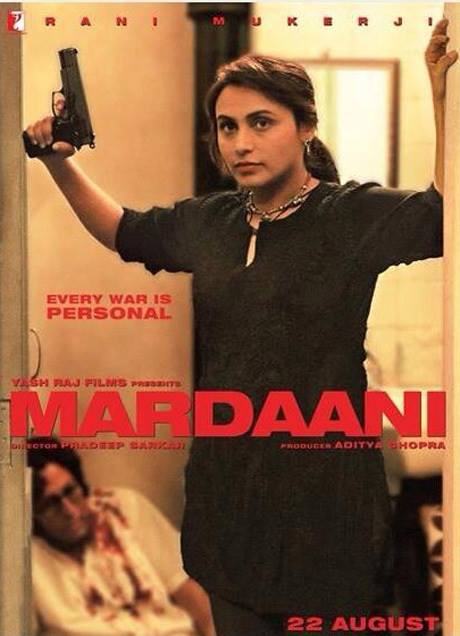 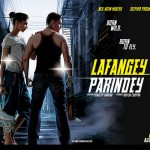 Lafangey Parindey (directed by Pradeep Sarkar ) is the product of a confused studio,Yash Raj films. Once the most illustrious productionÂ company in India now a factory of cookie cutter, bland and utterly forgettable products. A studio that just doesnâ€™t understand anymore how to recapture their old glory and Lafangey Parindey is the another final grasp of desperation from Â a man trying to hold on to anything he can whilst plummeting to the debts of mediocrity, this movie is basically Hans Gruber falling off the Nakatomi building!

Our fiend Ness from ShahrukhIsLove Â and I decided to do a double review for this movie as we stumbled across it on the same day and decided/were forced to watch it.

You can find her review here which is a great piece of writing although I do not agree with much of it. Ness found a lot of enjoyment out of Lafangey, I unfortunately found almost none.

To summarize the plot, Nandu is a sweaty, grease-laden underground fighter with heightened extra sensory perception or an acute sense of smell (must be one of the two as he can knock out his opponent blind folded with one single punch). Â Before the movie starts( in the part we don’t get to see), he hires a team of communication consultants to come up with the perfect catchy nickname which would look good on Â billboards and publicity hoardings as well give him exactly the right street amount of cred for his homies and peeps who he enjoys taking motorcycle rides with.

Â After holding focus groups, in depth motivational analysis and finally a Don Draper-type eureka moment they came up with the name â€œOne shot Nanduâ€ and there was much rejoicing. Armed with a snappy nickname, his band of motorcycling cronies and his desi-street lingo dictionary (although nothing of Govinda level: â€œHaata sawan ki ghata kha khuja ke batti buzhake soja nintukale pintukale..Raste pe khadeli Anty bajarahi hain baar baar ghanti..atale watae shaane..Kulla ghuma ke pashchim ko palat..phutale watale shaane..â€-Deewana Mastana) Nandu is ready to take on the world if he can find time between some horribly choreographed dancing and inspiring a few precocious SlumDog Millionaire-rejects.

One Shot is student of the Bobby Deolâ€™s school of boxing, he decides that you donâ€™t need to tone or train any part of your body to be a professional fighter. Just a few pushups here and there suffice!

He feels a promotion is well deserved wants to take the next step career wise to major league Goondabaazi so he asks Anna (the criminally underused Kay Kay) Â to take him on his next Goonda related assignment.

Pinky is from the same neighborhood Â as Nandu and wants to use her skating ability to skate her way to a better life by taking part in India Got talent. Pinky is very tall and her arms and legs are all over the place. She is clearly not a quitter and can be as foul mouthed as the rest of the Basti- gang, these facets of her personality will be highlighted incessantly throughout the movie. Â She gets run over by a car in a scene very reminiscent of Brad Pittâ€™s death scene in Meet Joe Black and loses her ability to see! (Can someone edit both these scenes together?- it might be bigger than the keyboard cat!)

So what happens next?

Will Pinky manage to find a dance partner?

Will Nandu be able to come to grips with his guilt?

Let me save you the trouble of actually watching this arduous journey of a movie by saying: of course they will. To quote The Zohan:â€ I have seen this. I have done this. You don’t want thisâ€

This movie is filled with Tarantino-esque movie references or Â Anu Malik type â€œinpirationsâ€ but since the performances by the leadcast are pretty monochromous It is never clear which is which.

Here are some of the blatant dÃ©jÃ  vu feelings I had explained through the magic of math!

The point being we have seen this movie already a million times and Pradeep Sarkarâ€™s treatments adds nothing to the journey we take with these characters. Every beat is predictable and every dialogue uttered by the lead pair sounds false.

I donâ€™t know about these new actors lately, they are not able to convey true passion in their performance anymore, I just donâ€™t believe these people have any true feelings for each other.

ShahRukh Khan always claimed he can romance a tree if needed, I just donâ€™t see the same ability in the new Brat Pack of boys and girls and I do miss that essential Bollywood component to give me a full massala flavor. That chemistry between the lead pair is completely lacking between Deepika and Neil.

I worry for Neilâ€™s career, although likeable, I donâ€™t know what he can add to the Bollywood hero roster especially as the buzz around Jonny Gadaar has now completely died down and Â being a Hrithik RoshanÂ  look-alike Â isnâ€™t the best way forward. We know how well the Hrithik references worked for Harman Bawejaâ€™s career-ZING! (They do reference his resemblance again in this movie which I donâ€™t see but I never really do, maybe coz I knew a lot of twins growing upâ€¦)

Deepika, I worry less about since sheâ€™s quite easy on the eye which seems to be the most important factor of succes in bollywood movies, and if Priyanka Chopra can win a “best actress” award there is hope for Deepika. Plus she plays a blind girl which means she can mostly look away and stare blankly which she does pretty well.

So the story is old, treatment is bland, the setting and look is corny, performances are unconvincing, there is no chemistry between the performers,Â  the CGI in the skate performances have the most jarring visual effects I have seen in ages almost close to Game of Death-level Â work. (A movie completed with left over material after Bruce Leeâ€™s passing away, google it! It was painful)

What I did like about the Lafangey Parindey was Kay Kayâ€™s performances,Â which was blink-and miss ni length but itÂ made me at least take note of what was going on and beggars can’t be choosers.Â the otherÂ was the song “Man Lafangey” by the always excellent Mohit Chauhan. The production values are high but itâ€™s covered with the same YRF gloss that makes all their movies look exactly the same. Yash Raj films needs to fire their entire art department forÂ being lazy for the past 12 yearsÂ and then read this article by Cracked: 5 Annoying Trends That Make Every Movie Look the Same.

I’ really have been racking my brain but that truly is it!

Also if you want to see convincing fight scenes filmed in grizzly grey tones since thatâ€™s what the movie poster promises us, watch this underwear ad starring Salman Khan.

If you agree or disagree, leave us know in the comment section below!