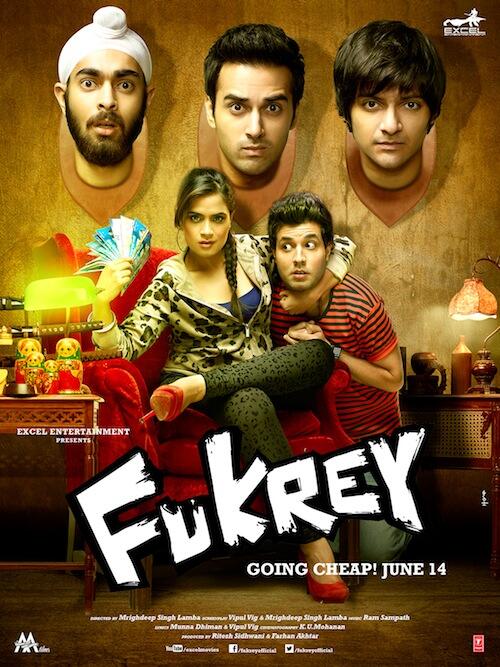 Here is a song from Excel’s forthcoming “Young Indian men bonding over shenanigans and learning life lessons along the way”- movie Fukrey.

Frankly after Dil Chahta Hai, 3 Idiots, Delhi Belly, Kai Po Che, I’m done with this story trope and nothing I have seen until now from Fukrey is showing us anything we haven’t seen yet.

I do have faith in Excel as a banner so they might spring some surprise, but I’m not hedging my bets on it.

Your college days are said to be the best of your life – fun, frivolous and filled with friendship. But this is far from true in the new “rogue-trip” film ‘Fukrey’.
Fukrey is a twisted coming-of-age drama and deliciously hilarious tale of four young, hapless ‘nobodies’ [‘Fukreys’], running after their individual desires, brought together by one dream. Their lives are turned upside down when they chase that elusive ‘get rich quick’ scheme. The film combines the crazy antics and madcap mishaps of four loser college friends, as their paths cross with an array of colourful characters, from a tough-talking Punjabi female don to a Jugaad Baaz college watchman. Mayhem ensues with predictably hilarious and unexpected results.
Fukrey stars a bevy of talented stars in the Bollywood arena – Richa Chadda [‘Oye Lucky! Lucky Oye!’, ‘Gangs of Wasseypur’]; Ali Fazal [3 Idiots, The Other End Of The Line] Manjot Singh [‘Oye Lucky! Lucky Oye!’, ‘Udaan’], Pulkit Samrat [‘Bittoo Boss’] and Varun Sharma, amongst others.
The film is directed by Mrighdeep Singh Lamba, [‘Teen Thay Bhai’], who also shares screenplay adaptation and writing credits with Vipul Vig. The vibrant and eclectic soundtrack is by composer, musician and producer Ram Sampath, noted for his musical scores on such films as: Delhi Belly, Talaash and Khakee.
The acclaimed producer duo Farhan Akhtar and Ritesh Sidhwani lend their sizable producer talents to the film under their production banner Excel Entertainment. The company was founded in 1999 with a vision to make contemporary Indian cinema. With modest beginnings nine years ago, today Excel is considered iconic in changing the sensibilities of Indian viewers, and for pushing the boundaries of ‘reel’ entertainment across the world. Some of Excel Entertainment’s cult classic projects include: Dil Chahta Hai, Lakshya [the official entry for the Rio International Film Festival], Zindagi Na Milegi Dobara and Don 1 and 2 [screened at the Berlin Film Festival].