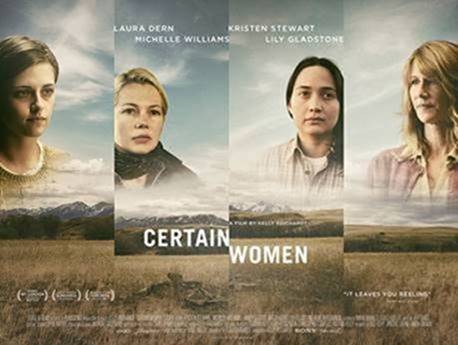 It’s been a long day for Kelly Reichardt, whose latest film Certain Women is due out in the UK this Friday, 3 March. When she listens to you, she folds into herself, her chin tucked in, almost disappearing into the enormous wing chair she’s seated in. And then she looks up to answer you, keen eyes direct.

It’s the morning after the Oscars and I want to know if she stayed up to watch the now notorious telecast that ended in a confused jumble with Moonlight eventually beating out La La Land for Best Picture.

“No, I didn’t. It was in the middle of the night,” she says, smiling a little wearily. She’s been working and gearing up for this grueling press junket, with more meaningful human contact in a day than most of us experience in a week. “I do know my fellow Miami filmmaker Barry Jenkins won for Moonlight, which was one for the home team. I liked the movie very much; it was nice to see parts of Miami portrayed that you normally don’t. It was a nice little shelter from a year of cruelty – when that film came out in such harsh times, to see it celebrated.”

Often described as the new master of the American experience, Reichardt’s own film, Certain Women, is also a triptych, a look at the lives of four ordinary women in an America that refuses to be safely pigeonholed into one familiar category or the other. There is an innate loneliness to the lives these women lead, bubbling under the surface where they have carefully hidden it away. It stems from their gender, their independence, their jobs, the people they love, the lives they have chosen for themselves. When the rancher played by Lily Gladstone finally makes a push and turns herself fully visible for an instant, it is a crystallized moment of uncertainty because this entire world is built on women who disappear in plain sight.

The stories of Certain Women are based on two collections of short stories by bestselling novelist Maile Meloy, Both Ways Is the Only Way I Want It (2009) and Half in Love (2002). I ask Reichardt why she was so drawn to Meloy’s work and she says, “They were just great character pieces; the characters were really sort of hunkered down in this particular environment.”

The film is set in Montana, home to Meloy, and it’s an interesting juxtaposition of landscape and lives: the visuals are of the vast sky and cold beauty that are a familiar staple of the great American Western but the characters are unlike any in those kinds of movies. There’s a lawyer (Laura Dern) whose client won’t take her professional advice seriously but needs her to be his emotional sounding board; there’s an unhappy wife (Michelle Williams) who chooses to focus on the perfect home in the midst of the shambles of her marriage; there’s a young lawyer (Kristen Stewart) who is so wrapped up in the mere act of being herself that she can’t see beyond that struggle; and there’s a rancher (Lily Gladstone) who is so desperate to make a connection, she will do it any way she can.

“[Meloy] is from Montana, so she set the stories there and I went there,” Reichardt says. “It’s super intertwined… sometimes you’ve got to come to a place to figure out the people and they go hand in hand.”

Most reviewers have singled out the story between the lonely rancher and the young lawyer she falls for; in the original collection, the rancher is male, which turns that story into a more traditional, familiar one of a lonely cowhand and a city slicker. But the story in Certain Women is not that story, it is instead an unfamiliar one of female friendship and companionship and love. I ask Reichardt about the gender switching.

“It’s not a sexual romance in that story,” she says. “It’s a crush of sorts and someone projecting a lot onto another person. It just might be an attraction to someone that has access to a world that the rancher doesn’t. Someone isolated romanticizing someone else’s life.”

It strikes me that the thing I found most interesting about Certain Women is its refusal to romanticize these lives. Unlike the characters who populate it, the film remains clear eyed to the end, taking its time to capture the complex reality of these lives.
Add Certain Women to the list of interesting movies that 2016 sent us.

Certain Women is in UK theaters this week