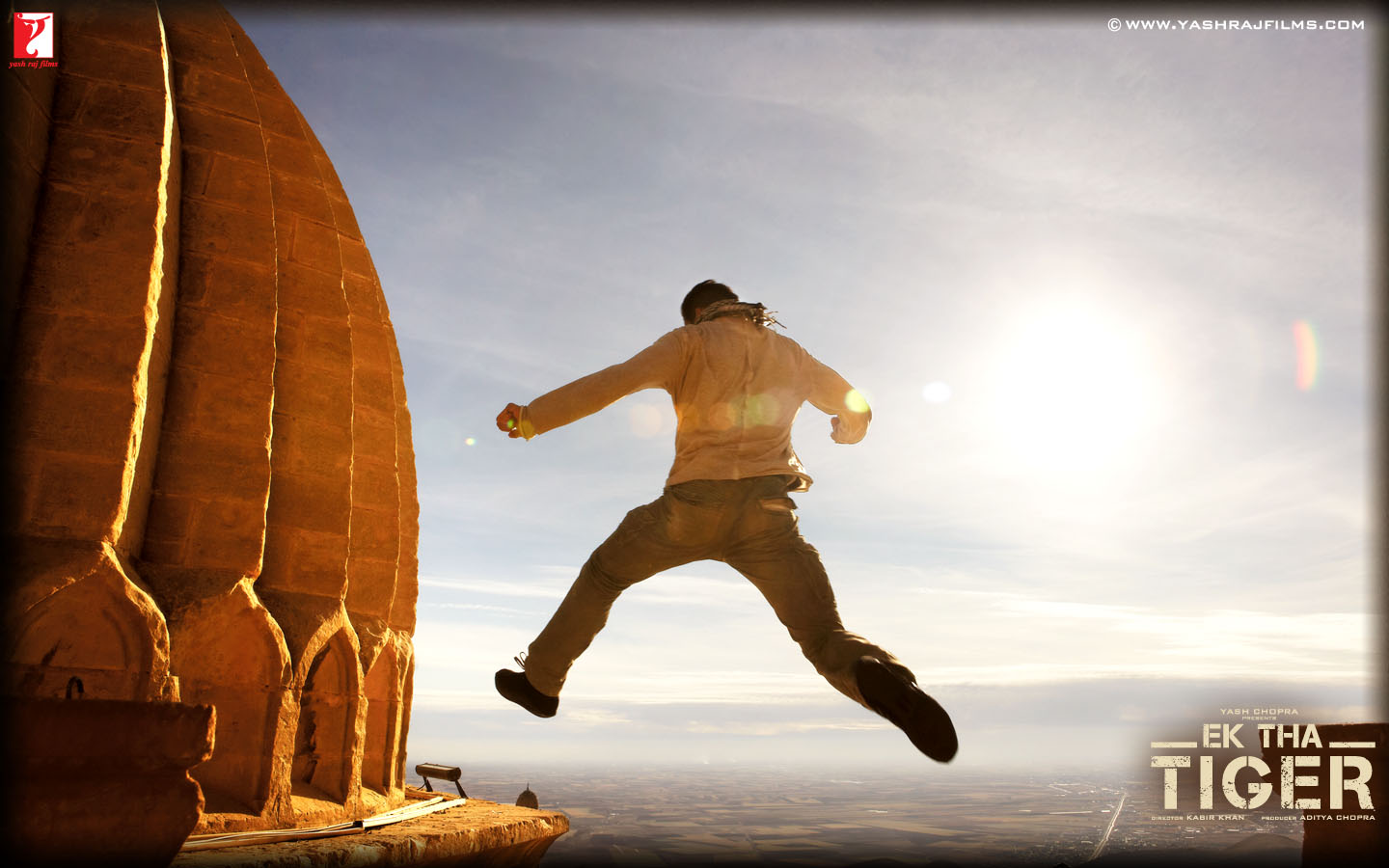 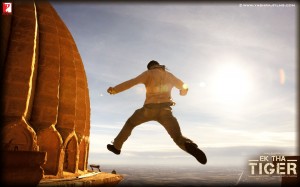 Yash Raj Films (YRF) and Salman Khan finally come together for the first time under the direction of Kabir Khan to bring us the story of what happens when a RAW Agent called Tiger starts using his “heart” when he has been trained to use his “head”. As usual with our reviews we have a separate spoiler section below so does this Tiger miaow or roaarrr, find out below!

Bollywood has been going spy crazy lately, starting with Don 2 (although that wasn’t really a spy movie but it ripped off many ideas from it) followed by Agent Vinod and a medium budget heroine driven movie (that I won’t be mentioning by name as it would spoil a big reveal), now comes Ek Tha Tiger (ETT), which from the first teaser trailer got catapulted to our “most looked forward”-movies of 2012.

ETT succeeds where the likes of Agent Vinod failed, is it delivers a movie that works within Bollywood conventions (sometimes to it’s detriment) and by not having it’s head up it’s own ass. This is big budget, big screen movie making, people. Where every shot looks pristine like it’s been scrubbed with Dettol, all the way from the locations to the actor’s faces. The dancers dance in sync, the fights are epic and in YRF tradition, we travel around the world without giving ourselves a Turkish makeover.

There are moments that feel like a compromise made by either the director Kabir Khan (who has a background in documentary film making and almost makes us sense his distain for selling out), star Salman Khan (who does not want to unleash the success he has tasted in recent years from his jaws like he lost a bet to one of the other Khan’s (and production house Yash Raj Films (who just can’t seem to find a consistency in it’s success ratio) so is trying out everything they can, even working with a star that they had until now not considered YRF material and one that they clearly can not control in any way possible.

The movie is segmented in very clearly delineated chapters in the screenplay, each with a different mood, location and wardrobes that sometimes gel together and sometimes don’t.

We start of, in the greatest of James Bond tradition, with action packed prologue set in Northern Iraq, where Tiger needs to deal with a double agent who has been selling RAW secrets to the ISI but essentially this is just a teaser to the bad ass-dom of the central character and has no further baring to the rest of the plot, but it is some serious butt-kickery on a level we haven’t seen in Bollywood.

The movie really gets going when Tiger is then sent to Dublin (after cooking some daal for his boss and having a few drinks with him) and needs to shadow a nuclear scientist by posing as a writer where he meets and eventually falling in love with charming Zoya, part time dancer and part time caretaker of the professor.

The Dublin storyline is just the mcguffin to set up the romance in Ek Tha Tiger, playing off their real life chemistry between with Salman and Katrina which up until now hadn’t been harnessed on the big screen yet (neither in Maine Pyaar Kyun Kiya which was almost Katrina’s debut and neither Yuvraaj as Subhash Ghai lost his ability to make coherent movies back in the 80’s). 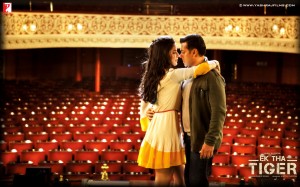 The back and forth dialogue feels so natural between both that you start wondering wonder how much was ad-libbed, references to Katrina’s pronunciation of the letter “dh” and her rabbit teeth seem to be very “Salman”.

What I really appreciated is that we go to see the sweet and charming Salman Khan again as we have to be honest that in Dabanng, Wanted and Ready he was playing kind of an a*hole. Salman seems to be having fun interacting with the local extras in every city he is in, from the hotel reception clerks in Dublin to the kids and old folks in Cuba. He is also genuinely funny again without having to play off his own persona or referencing Salman Khan the star.  The humor is dryer without obvious punchlines followed by a deliberate pause. There are some wonderful visual gags that works really well especially the intercut scenes of previous adventures and mishaps of Tiger and some of the winking at the camera without having to break the 4th wall. And clearly Salman loved spending time with Katrina and how could you not?

Katrina Kaif has been so consistent in delivering roles that seem to fit her like a glove. Like Mere Brother Ki Dulhan or even Zindagi Na Milegi Dobara, I can’t see any other actress enacting the role of Zoya. The lady just has tons of screen presence and besides her bedazzling styling she brings such physicality to the role that other actresses like Priyanka (Don 2) and Deepika (Chandni Chowk To China) can only dream of.

I wouldn’t have minded seeing some more of that physicality in some key scenes (especially just before the interval). The problem she has is the characterization of Zoya is sometimes flaky, the screenplay never decides if she is a bad ass on the level of Tiger or a damsel in distress and that really does a disservice to Katrina. 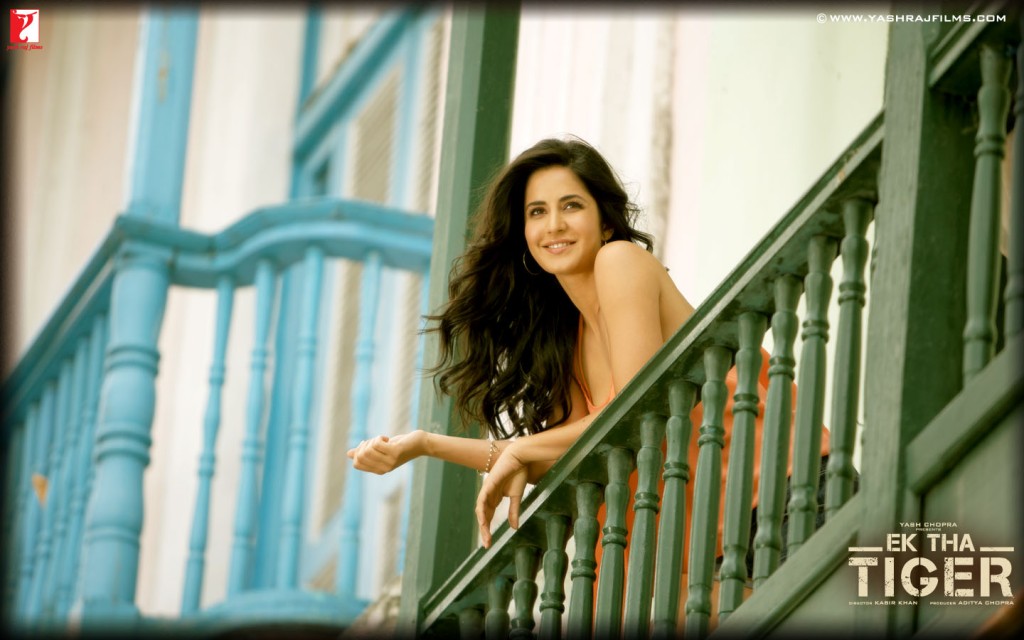 The production values are top notch and ETT is beautifully framed, and truly feels global without feeling disjointed (unlike Don 2 and Agent Vinod which felt the need to globe hop for no reason) or giving a sense of déjà vu even though locations like Istanbul have recently been rediscovered and used in quite a few other movies (Game amongst other but maybe I’m the only one how saw that). YRF did a slightly better at the hiring non-Indian extras and background dancers job than that other foreign local gloss machine Dharma Films (who really scrape the bottom of the barrel, may I remind you of the drunk chapel scene in Ek Main Aur Ek Tu?).

The action set pieces are probably the highlight of the movie and they really pack multiple scissor kicks, the only problem I had was with the facial imaging effects they used on the Salman Khan Body Double were slightly jarring in the Dublin sequence, they weren’t as bad as some scenes in Krissh but when it comes to daylight shots, there is still some work to be done.

Another problem is the lack of central villain so we don’t get a final brawl although the climax does deliver in many other ways.

A bigger issue is that we never get a true motivation for why our romantic duo is being chased with such vigor, this could have easily been tweaked on a screenplay level but if you haven’t bought into the Tiger by then, you probably won’t.

Final Verdict: The Movie is GREEEEEAAAT (Could I leave you guys without a lame Tony The Tiger reference? – no, as that’s the kind of reviewer I am).

But lame jokes aside Ek Tha Tiger is a great summer blockbuster that is slightly loose around the edges but the performances of the main leads, the romance, production values, cinematography and action set pieces truly deliver and isn’t that really what we look for during the summer? 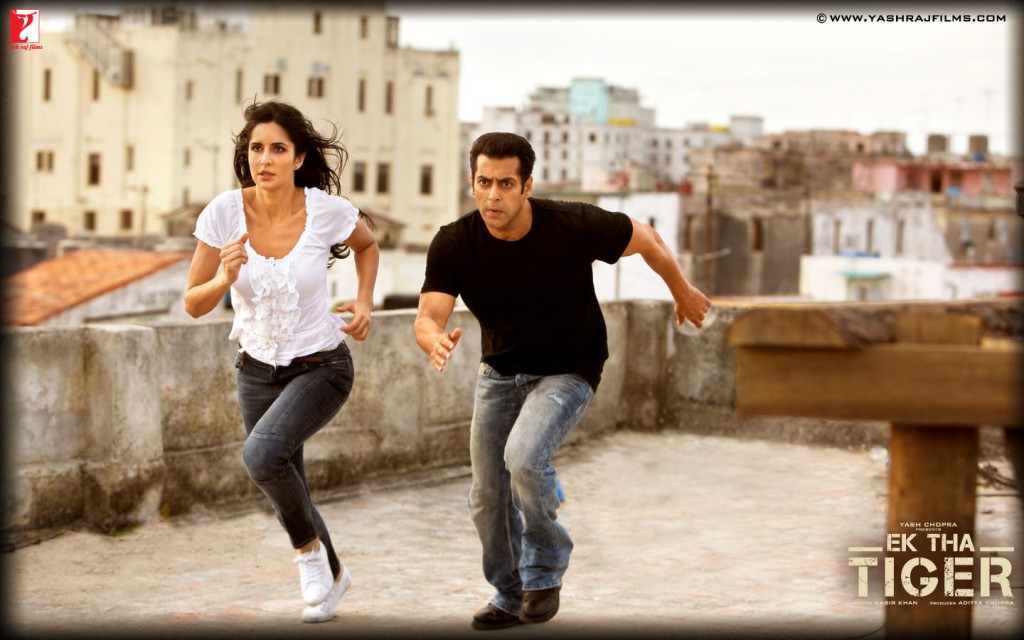 Although the trailer was great and built up the required buzz, it did spoil quite a few jokes and action set pieces, which is a shame as they lessen the impact within the movie, but maybe that’s my mistake for rewatching them a billion time in anticipation for the release.

Was there a need for the other ISI agent beside Katrina? It would have easily sufficed having her go all Angelina Jolie on the audience although Salman fans would probably not appreciate her clobbering him like a ninja and stealing his phone.

This movie is riddled with gaping lot of plot holes (Salman even jumps over a few in Iraq) consider yourself warned.

The biggest compromises in ETT were made by director Kabir Khan. To the point that if you listen very carefully you can hear him gnashing his teeth in the back ground at very forced Salman Khan trademark shirt removal scene. The placing of the song “Mashallah” also feels like an after thought, although beautifully picturised, these all out populist conventions clearly make the director feel ill at ease and it shows.

For a moment during the tram sequence I thought Salman would go all Spiderman on us and stop the train with his bare hands.

The epilogue and voice over were completely redundant as was the reveal of Tiger’s real name, had even less impact than the whole Professor Kidwai scene.